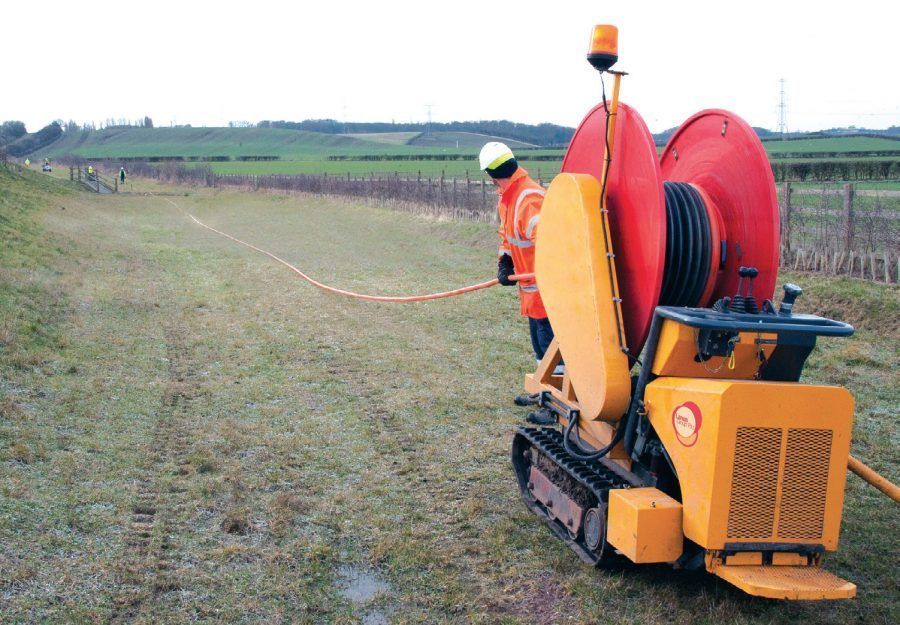 Highways England had commissioned a programme of works to upgrade the A46 near Nottingham, including the section that passes Bingham. As part of this work, the contractor, Vinci Construction, was required to clear a badger tunnel under the trunk road, which had become almost completely blocked with silt and rubble. Vinci commissioned Lanes Group to do the work. However the tunnel was in a very remote location, which required innovative thinking to complete the task.

The Lanes Group team based in Derby was handed the challenge of cleaning the badger tunnel.
Without the tunnel, badgers whose territories are intersected by the road would have to cross the dual carriageway, endangering their lives, and those of road users. An estimated 45,000 badgers are killed on Britain’s roads each year, and badgers regularly cause road accidents across the county, some resulting in fatalities and serious injuries.

The tunnel was more than 100 metres long and a metre wide. The only practical way to clean it was to use a jet vac tanker to force the silt and rubble from the pipe. However, there was nowhere on the A46 for the tanker to park safely to carry out the work.

The answer was to create a jetting hose half a mile long, the longest run created by a Lanes Group team in the East Midlands.

This was achieved by placing a jet vac tanker next to a balancing pond – used to collect water run-off from the trunk road. This was the water source closest to the badger tunnel.

The jet vac tanker’s jetting hose was then linked in relay to the hose reels of three Terra Jets – tracked remote access jetting machines – each of which contained 200 metres of hose. This created a continuous hose more than 800 metres long.

The hose was run to the downstream end of the badger tunnel where the Lanes Group engineers used the latest plough jetting attachment to clear the pipe.

Pumps to continuously feed the jet vac tanker with water from the lake. Before work could begin, an excavator was used to lower the badger run ‘outfall’ area to receive the washings from the jetting process.

To prevent a cropped field next to the worksite becoming contaminated with the washings, jetting water was pumped through a series of filter bails so it would dissipate naturally.

• The task was completed in a safe, timely and cost-effective way

• This left the tunnel clear and available for badgers to use to cross the road, so they and road users were not put at risk.