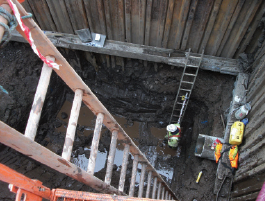 In a 15 week project, Lanes Group’s Glasgow depot successfully installed two interceptor tanks at Crosshouse Hospital in Kilmarnock. The work required a substantial excavation, as the pipework the tanks had to be connected to was 10 metres underground. In most cases, such projects are managed by large civil engineering companies. However, this excavation project shows that Lanes Group has the expertise and capacity to do this work as well.

Lanes Group was commissioned by DMP Consulting Engineers, on behalf of Ayrshire and Arran Health Board, to install an interceptor tank on the hospital site.

The tank would have two purposes – to take foul waste water from the newly-built Ayrshire Maternity Hospital, and surface water from car parks on the hospital site.

Because of the topography of the site and the location of the pipes that the tank had to be connected to, it would be a substantial excavation project.

Once the initial excavation was carried out, and the pipe system was inspected and surveyed, it became clear that more than one tank would be needed to ensure surface water from all the car parks on the site was collected and treated.

Working with DMP, a proposal for the additional works was agreed with the health board.

A hole the size of a large house

The revised project involved the installation of two underground Klargester bypass separator tanks, one seven metres and the other five metres in length.
The tanks incorporate a fuel interceptor and other filters that clean the water, allowing it to be discharged into the surface water course.

About 40 metres of pipework had to be diverted, along with a gas main and mainline electricity cable, to accommodate the tanks.

An excavation 10 metres deep, seven metres wide and more than 12 metres long had to be dug – requiring the excavation of an estimated 1,500 tonnes of material, including the movement of 3,000 cubic metres of material off site.

An estimated 4,500 tonnes of soil was excavated, creating a hole large enough to hold a three storey house.

All this was done on a hospital site, increasing the sensitivity of the project. Indeed, the excavation was less than one metre from the maternity unit.

Great care was taken to leave free access within the hospital complex for vehicles and pedestrians, and to maintain strict environmental control throughout the duration of the contract.

The site and traffic management plan was designed to reduce pollution, in terms of both noise, emissions and dust, to an absolute minimum, for example by using eco-friendly, super-silent plant.

The project was completed in 15 weeks, and the client – the health board – was very pleased with both the way the excavation was carried out, and the results.