ENQUIRY FORM
Commercial Domestic Professional Services Rail Division Utilities Insurance
Commercial Help & Advice Drainage Problems What are concretebergs, and what can be done to prevent them?

What are concretebergs, and what can be done to prevent them?

The issue of improper concrete disposal and concrete spills has taken on renewed prominence with the discovery of a gigantic “concreteberg” in the sewers beneath London in April 2019, a huge mass blocking the pipes that required round-the-clock work by a team of sewer engineers to remove. This incident shed light on the serious risk that concrete spills can pose to British drains.

Given the significant costs and inconvenience associated with the removal of concretebergs, it is vital that domestic and commercial drain users alike educate themselves on what causes this phenomenon, and take the necessary steps to prevent them from forming. 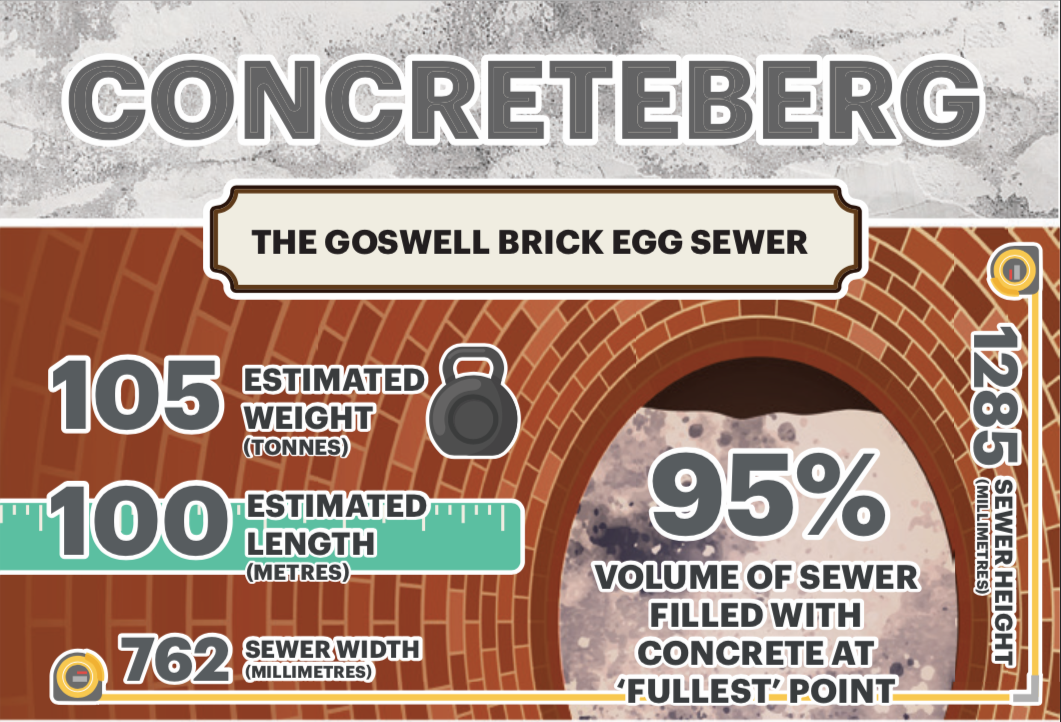 As the name suggests, concretebergs are giant masses of building material that accumulates in the drain before solidifying, resulting in a stubborn blockage that cannot be removed without time-consuming manual excavation.

They take their name from fatbergs – a similar form of blockage that results from solidified fat, oil and grease congealing with non-biodegradable items in the pipes – but concretebergs are even more difficult to get rid of, especially when the concrete sets against the brickwork found in older sewer systems.

The North London concreteberg found beneath Goswell Street in Islington provided a graphic example of the seriousness of this problem. Measuring 100 metres long and weighing up to 105 tonnes – the same as a blue whale or 20 elephants – it was the largest mass of the building material ever found in a London sewer, with Lanes Group engineers working alongside Thames Water to slowly chip away at the mass over a two-month period in order to get rid of it.

Because concretebergs are rock-hard, they can completely prevent wastewater from flowing through the pipes, resulting in significant damage to the sewer system and increasing the risk of flooding in the nearby area.

Concretebergs are caused when cement, grout and other building materials enter the drainage system, resulting in the material congealing and forming into solid masses within the pipes.

Sometimes, this happens purely by accident, or as a result of carelessness on the part of tradespeople and home renovators working

with concrete. Cement can end up being washed into the sewers during building work, while smaller blockages can also occur when workers clean cement off their tools and equipment, before pouring the washout water into drains and gullies.

This results in small deposits that settle in bends, causing obstructions and reducing the water flow.

Although construction companies have a duty of care to properly manage the waste they produce on-site, many firms fail to fully research the layout of the utilities network below ground before starting work. This means that concrete often ends up accidentally getting into the drains and sewers during the piling and pouring of the foundations, which plays a big role in the formation of concretebergs.

What can be done to prevent concretebergs?

Given the damage that concretebergs can cause, it is essential that contractors and construction professionals ensure they are always diligent about properly analysing and mapping the drain and sewer networks beneath building sites, before starting the piling and laying of concrete foundations.

This vigilance should extend to anyone dealing with cement, concrete, tiling grout and other construction materials. Taking the necessary steps to dispose of these materials responsibly is essential to prevent concreteberg formation – especially for those working for a commercial enterprise.

As such. businesses should honour their legal responsibilities to account for the proper storage, transport and disposal of any waste created by their work, while also considering the benefits of reusing or recycling excess materials. Not only will this prevent concrete waste and protect the environment, but will also save money for the company by making their resources stretch further.

Meanwhile, homeowners using cement for their DIY projects should make sure that any excess material is allowed to harden, and then disposed of as a solid mass, rather than poured into drains and gullies. In this way, everyone can do their bit to prevent the UK’s concreteberg problem getting any bigger.

If you are dealing with a concreteberg-related drainage problem on your premises, the experts at Lanes for Drains may be able to help. Find out more about our concreteberg removal services, or call us on 0333 252 0005 for more information.