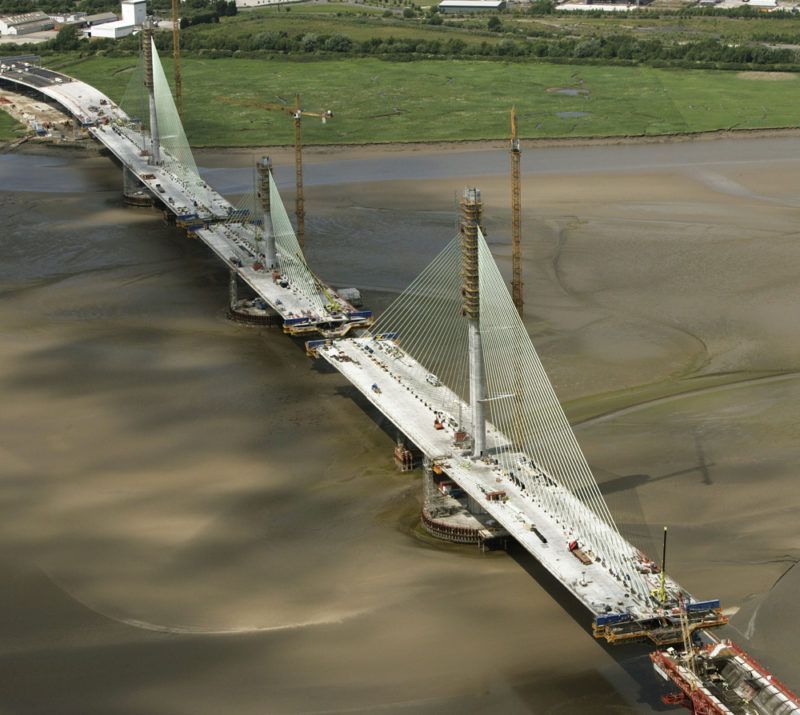 To go over one of the UK’s most famous rivers – you must also go underground.

Lanes Group has travelled more than 10 kilometres through the drains and sewers of north Cheshire as it has supported the building of Mersey Gateway, the second crossing of the River Mersey in Halton.

As the construction project’s specialist drainage survey and maintenance contractor, over a period of 18 months, its teams have carried out remote CCTV surveys of drain and sewer pipes that add up to at least that length.

They have also completed dozens of remedial projects on the highway drainage system at both ends of the bridge, including pipe desilting and unblocking, root cutting, patch lining, and full pipe lining.

The new £1.86bn landmark cable-stayed bridge and regeneration project will link Runcorn on the south bank with Widnes, and is due to open in autumn 2017.

The construction programme is being led by Merseylink Civil Contractors Joint Venture, which consists of FCC, Kier, and Samsung.

Lanes Group was selected in November 2015 to provide drainage survey and maintenance services throughout the project, with work co-ordinated by the company’s Chester depot.

Derek Campbell, Areas Development Manager for Lanes based in Chester, said: “We have been on hand 24 hours a day to deliver both planned and reactive drainage services for the project.

“Where it crosses the Mersey, the bridge is 1,000m long. We’ve completed enough CCTV drain surveys to cross and re-cross that span at least 10 times already.

“We work very closely with Merseylink Civil Contractors JV’s teams, always making sure we do all we can to keep the challenging construction schedule on track.”

In one of dozens of cases, Lanes drainage engineers completed a night-time emergency CCTV survey and root cutting project on a drain line crossing a road, so it could be asphalted, on schedule, the next morning.

Mike Ronan, Section Engineer for S4 Roadworks, said: “The support from Lanes was vital. It wasn’t an easy fix, but with an excellent attitude and some clever thinking, they got the job done.”

Drainage surveys carried out by the Lanes teams have helped the bridge’s civil engineering team make sure highway drains along new access roads are integrated optimally with the wider drainage system.

They are also cleaning and surveying each section of new highway drainage as it is being installed.

Lanes’ advanced specialist equipment, including recycler jet vac tankers, which are 68% more productive than standard machines, have played their part in ensuring its service is both efficient and effective.

Derek Campbell said: “We’re now gearing up for a final push towards the bridge opening. As part of the final preparation work, there will be a lot more pre-handover drainage surveys to carry out.”

The new bridge is being built 1.5 km to the east of the Silver Jubilee Bridge. It will have six lanes and be a toll bridge, though it will be free to use for eligible people living in Halton, the local authority area.