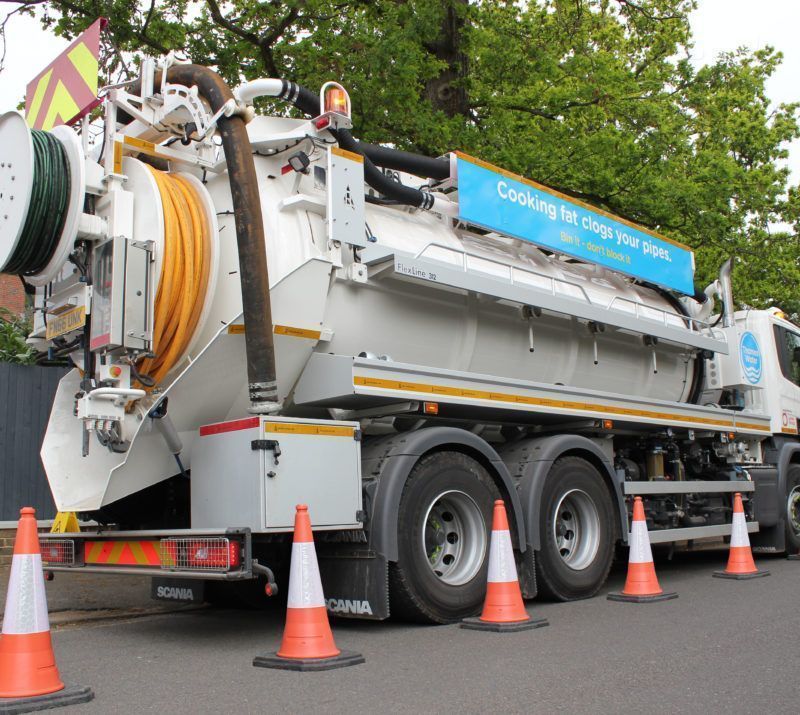 Lanes Utilities is deploying a new 12,000 PSI jet vac tanker to tackle the menace of cowboy builders who dispose of concrete by pouring it down sewers.

The new JHL high-pressure unit has the power to blast concrete from the inside of a sewer, preventing the need for a costly and time-consuming excavation to replace the blocked pipe.

The specialist jet vac tanker is more than four times more powerful than a standard machine. It is supporting the work of Lanes Utilities, part of Lanes Group plc, as the wastewater network maintenance partner for Thames Water.

Thames Water has become increasingly concerned about the instances of concrete, and other difficult-to-remove materials, causing sewer blockages that can disrupt services for hundreds of wastewater customers at a time.

In February 2017, the company had to begin a major civil engineering project to remove a 10-metre section of main sewer under Hanover Park, Peckham, South London, which was found to be completed filled with concrete.

Other construction materials, such as mortar, grout and mastic can get into drains and sewers. Once solidified, they create snagging points for other materials wrongly disposed of down drains, such as wet pipes and sanitary products.

The problem may only be discovered during periods of heavy rainfall, when the restricted flow in the sewer results in localised flooding, something Thames Water is tackling with its Bin it – don’t block it campaign.

Lanes Utilities Director Andy Brierley said: “In some cases, builders accidently pour concrete and other materials down drains and sewers, but in others it appears to be a deliberate act to avoid the need to dispose of it legitimately.

“While our Thames Water colleagues are escalating their legal response to such irresponsible actions, we realised we needed a new weapon in our armoury to tackle these extreme blockages.

“By their very nature, these blockages can be devastating for whole communities. One moment a large sewer can be flowing freely, the next it can be completely blocked, or flooding, inconveniencing thousands of wastewater customers.”

The COMBI jet vac tanker has three jetting reels, including a high-pressure jetting unit with a 130-metre hose that can jet at up to 11,637 pounds per square inch.

Its water jets are powerful enough to cut through concrete solidified inside sewer pipes. They can also be used to slice up other items, such as bricks, steel rods, and plastic pipes, as well as speed up removal of the toughest fatbergs, pipe scale and encrustations.

This is achieved with a procedure called precision directional water jetting. The jetting head is placed over the unwanted material. The cutting process is then monitored remotely using a CCTV drainage camera while it is removed, leaving the sewer pipe intact.

Since it was introduced to the Lanes Utilities fleet in March 2017, the high-pressure unit has been kept busy across the Thames Water region, primarily tackling these most challenging of blockage problems.

It is operated by wastewater engineers Chris Costin and Dan Merry.

Chris Constin said: “This is a very effective piece of kit. We can now cut large chunks of concrete and other material from inside pipes, and remove pretty much all traces of the blockage to reduce the risk of snagging and further blockages.

“If the sewer is blocked along its length, there may be no option but to excavate and replace it. But for a lot of our most serious blockage problems, we’ve now stepped up several levels in our capability to deal with them.”