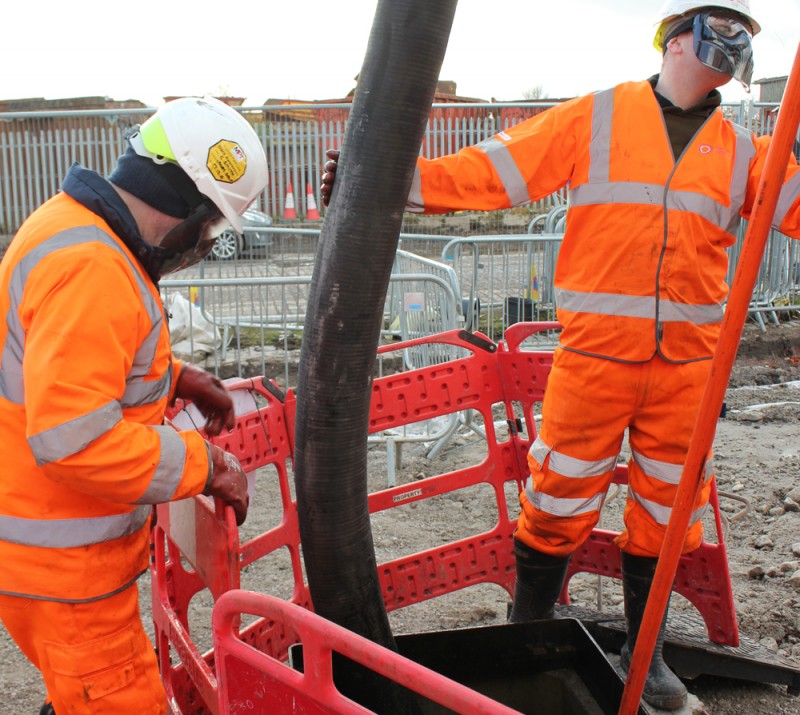 A decade of drainage services delivered by Lanes Group plc during the building of Manchester’s Metrolink tram service is approaching the end of the line.

Drainage engineers based at the Lanes depot in Eccles, Greater Manchester, have been working on the new Trafford Park Line which is nearing completion.

The company has provided drainage teams to support the construction of five extensions to the Metrolink tram network since 2010.

It has been built by MPT, a consortium of Laing O’Rourke, VolkerRail and Thales. When it opens on March 22, it will be operated on behalf of Transport for Greater Manchester by KeolisAmey.

Lanes Business Development Manager Simon Roberts has been responsible for overseeing service delivery for almost all the drainage work carried out by Lanes.

He said: “We have delivered tens of thousands of hours of drainage work, over hundreds of shifts and just about every service in the Lanes locker to support the Metrolink expansion.

“In terms of the creation of a vital public service used by millions of people, it has been a very rewarding experience for me and for Lanes as a business.”

The opening of the Trafford Park Line marks the end of a 10-year £2bn expansion programme which has added 70km of track and created a tram network with 99 stations.

Metrolink clocked up 43.7m passenger journeys in 2018/19, up 6.1% year-on-year, a figure due to be surpassed over the next 12 months with the opening of the Trafford Park Line.

Lanes drainage teams have been commissioned to delivery multiple services throughout each stage of the building process.

Before construction could begin on each phase, extensive asset surveying work was needed, including mapping the position and condition of all surface water drains, culverts and foul sewers.

Over the decade, this involved Lanes submitting CCTV drainage survey reports for many thousands of metres of wastewater pipes along each route.

They then had to be surveyed again as the tram lines were installed to ensure sewer service reconnections were made correctly and the tram’s drainage pipes were in good working order.

Where necessary, sewers and culverts also had to be repaired or strengthened using no-dig cured in place pipe (CIPP) lining technology, also delivered by Lanes.

This has been important where tram lines cross sewers. The tramlines are laid on a bed of concrete, adding to the pressure placed on belowground utility services.

By installing resin-impregnated glass-reinforced liners in these sections of sewer, creating a new pipe within a pipe, their structural strength could be increased.

In the last tranche of drainage work, Lanes teams have been completing pre-adoption CCTV drainage surveys at the Trafford Centre, the final stop on the Trafford Park Line. They have also been cleaning and surveying sewers associated with a park and ride car park at the new Parkway stop, also on behalf of MPT.