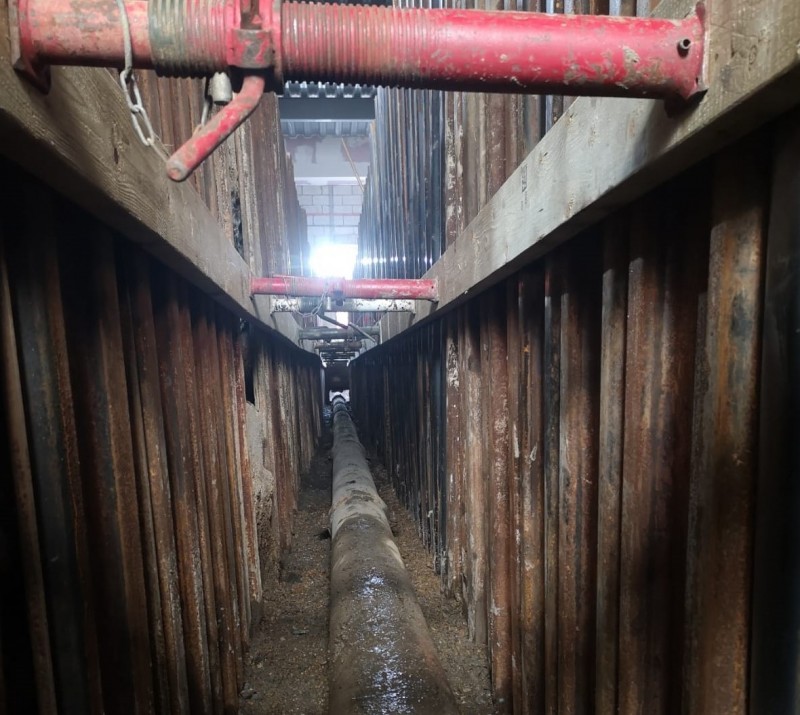 Drainage engineers from Lanes Group plc have completed the excavation and replacement of a cast iron wastewater pipe during the refurbishment of a row of shops.

A second drain was rehabilitated by installing local structural repairs (LSRs), also known as patch liners, beneath the five shops in the centre of King’s Lynn in Norfolk.

The excavation and drain renovation work had to be completed before the retail units could undergo final refit and be handed over to tenants.

Stuart Garrett, Account Manager for Lanes, said: “This was a major drain repair that had to be completed in a tight timescale to fit in with our client’s project plan for bringing the retail space back into use.

“A vital objective for retail landlords is to keep such refurbishment projects as short as possible. Lanes has the specialist assets and expertise needed by construction and fit-out contractors to meet these challenging targets.”

The Lanes St Neots depot was commissioned to carry out a CCTV drainage survey of wastewater pipes serving the retail units. This revealed significant problems with the 17m-long 225mm cast iron pipe.

HD video images captured by robotic CCTV camera revealed it had become badly corroded and was sagging at points along its length.

The survey also found the pipe did not have a large enough gradient, so would be prone to blockages and sewer flooding, and that it was not being supported by adequate bedding material.

“After seeing our CCTV survey report, the project’s architectural engineers concluded that the cast iron pipe had to be replaced, while another 35m length of 100mm-diametre clay pipe should be repaired with patch liners,” said Stuart Garrett.

“The disruption, cost and hazards associated with excavations mean they are increasingly seen as a last resort. But we could put together teams to ensure the work was completed safely and in a timely manner.”

A mechanical digger was used to excavate a 1.5m-deep trench to expose the cast iron pipe along most of its length. A section under the shop window was dug by hand to stop the window being damaged by vibrations.

Steel shuttering was installed to protect Lanes personnel during the work.

The old pipe was removed, and new bedding material laid. Then, a new 300mm cast iron pipe was laid and connected to the main sewer via a manhole beneath pavement two metres from the shopfront.

While the drain excavation was being carried out, another Lanes team rehabilitated the 100mm-diametre clay pipe.

The first task was to remove concrete deposits found inside the pipe during the CCTV survey. These were likely to have been washed into the drain during the refurbishment process.

A CCTV drainage survey team worked closely with the jetting and cutting teams to guide the cleaning process and ensure it was completed without damaging the pipe.

Then, 15 one-metre-long patch liners were installed to strengthen the pipe and ensure it was watertight.

Patch liners are short cured-in-place pipeliners (CIPP), usually up to 1.5 metres in length. They are made from resin-impregnated sheets of glass reinforced plastic (GRP) and inserted into a pipe at the required positions using an inflatable packer then left to cure, or harden, in ambient temperature.

Stuart Garrett said: “Our client was very pleased with the outcome. When the pipe was reinstated, you would have hardly known the excavation had been carried out.

“The project demonstrates the capability and capacity Lanes has locally to carry out complex and challenging multi-disciplinary tasks to a very high standard. “If necessary, we can also call in other specialist Lanes services, such as full pipe lining, tankering, high volume wet/dry vacuumation, and professional engineering services.”