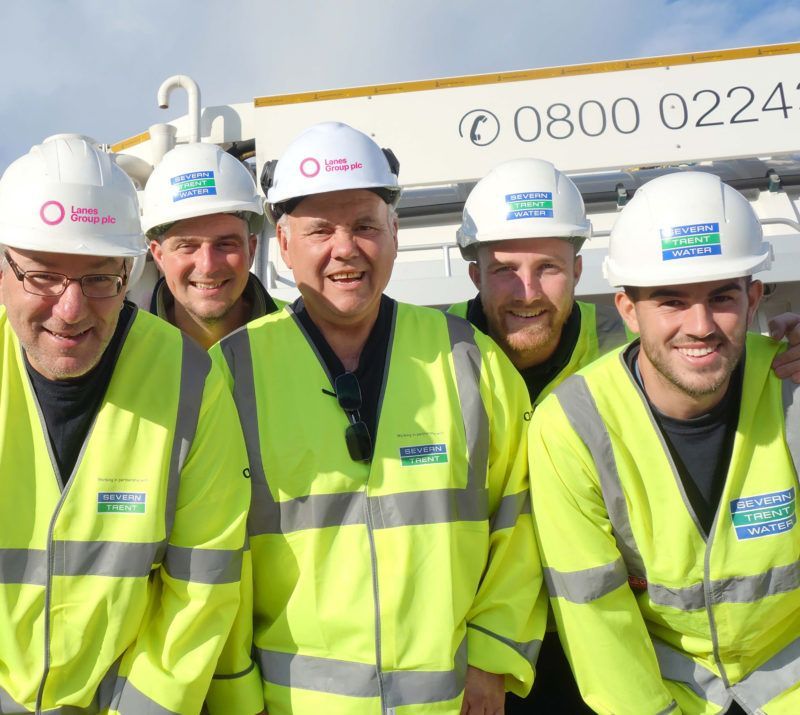 At Lanes Group, we believe our talented team of drainage engineers are doing amazing work across the country – which is why we’re thrilled that a group of Lanes engineers recently got to make their TV debut, courtesy of ITV1’s documentary series Sewer Men!

The incredible opportunity saw a camera crew following our intrepid Lanes staff in their day-to-day jobs, examining their work with Amey and Severn Trent Water and the challenges they face on a regular basis as they strive to keep the UK’s drains and sewers in optimum condition.

Looking at both the practical and administrative side of our work, Sewer Men has provided a great showcase for helping the general public understand exactly how we operate.

Sewer Men is a lighthearted, character-driven series that aims to shed light on the work done by Severn Trent – one of the UK’s biggest water and sewage firms.

Featuring insights from everyone at the water company, from the patrol teams and emergency staff to workers in call centres and reservoirs, Sewer Men examines the daily problems, routines and risks faced by Severn Trent, mixing reportage and fixed-rig footage to capture the scale of these operations.

As one of Severn Trent’s key contractors, the programme features candid and revealing footage of the big and small jobs our Lanes engineers do to help keep the country’s wastewater networks flowing.

However, the real appeal of Sewer Men lies in the personalities of the professional men and women involved in the show – and Lanes Group were proud to be asked to take part by the water company.

How did Lanes Group get involved?

As the UK’s biggest privately-owned specialist drainage contractor, Lanes Group work with Amey and Severn Trent Water as part of a Tier 2 framework contract. Amey is one of the UKs leading public and regulated services providers, while Severn Trent is one of the UK’s major water suppliers, serving 4.5 million households and businesses across the Midlands.

The Sewer Men production crew filmed at Severn Trent’s largest sewage treatment works in Minworth. A group of Lanes staffers from our Stafford utility hub – from which more than 170 people carry out sewer maintenance work in and around the Midlands – worked alongside Severn Trent’s crews in Minworth, tackling a variety of daily challenges with their customary enthusiasm and clearly enjoying their moment of TV fame!

Lanes contract manager Glyn Bickerstaffe was delighted with how the team made the most of their big TV debut, saying: “Our teams did a great job of showing what wastewater maintenance is all about.

“We hope it encourages more people – women as well as men – to see working for Lanes is an excellent career, where people learn valuable skills and can progress quickly.” 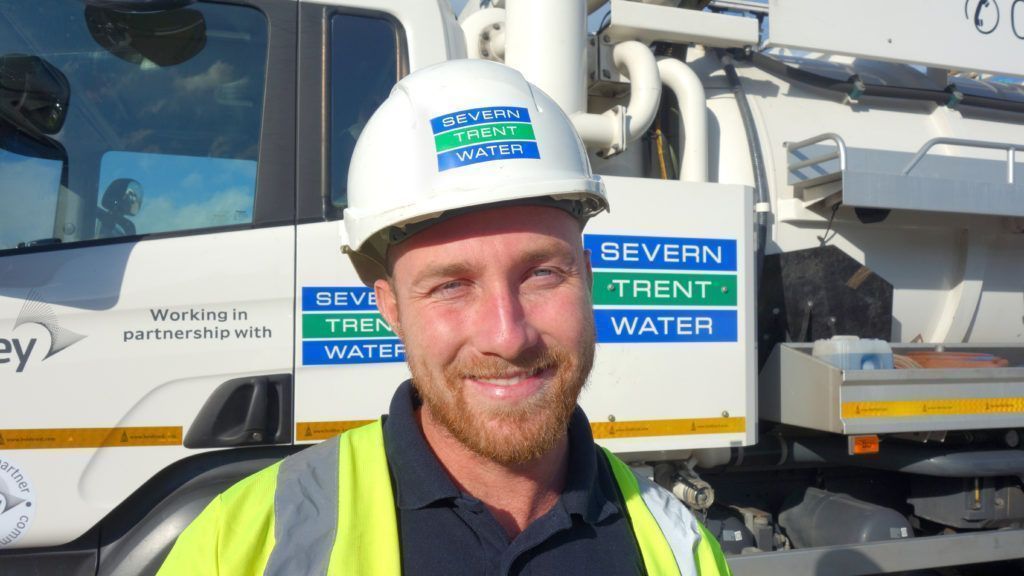 One of the Lanes staffers who stars most prominently in Sewer Men is Mark Davies, site supervisor at our facility in Stafford. The 29-year-old is a qualified sewer jetting professional who’s been with Lanes for six years, and is a core member of our busy team in Stafford, working with Severn Trent on our contract with Amey.

In the first episode of Sewer Men, Mark can be seen delving into some of Birmingham’s most congested pipes – at point encountering the grisly spectacle of a drain full of condoms. According to Mark, the feeling of being followed around on the job by a camera crew was strange at first, but the team soon got used to it.

He explained: “We relaxed and just got on with our jobs. It was fun to be able to show others what we do. Hopefully, they found it interesting!”

For Mark, the show provided a great opportunity to demonstrate just how much his work at Lanes means to him. The Tamworth resident, who’s a keen mechanic and touring car racing aficionado, has thrived in his role, likening his work to “solving a big puzzle”, due to the hidden nature of underground sewage pipes.

He said: “I love my job and wouldn’t want to do anything else. If you want work that’s got lots of variety, with never one day the same, working with lots of interesting technology and making a difference every day, it’s the job for you.”

Mark cited the great team spirit, the problem-solving and the opportunity to meet new people as his favourite aspects of the job, as well as the opportunity it provides to make a genuine difference in addressing the damage that blocked drains can create.

He went on to express hope that watching Sewer Men will help to get more people interested in choosing a career in drainage and water utilities by highlighting just how important this kind of work really is. Mark explained: “Working at Lanes is a career – there are lots of opportunities to get on and do different things. And women can work drainage engineers as well – it’s not just for men!

“I also hope people will see they can make a difference by not flushing wipes and other plastic products down toilets and fats and oils down sinks. If everyone did the right thing, the environment would be much better protected, and our jobs would be a lot easier.”

In addition to Mark, Sewer Men features appearances from a number of hardworking Lanes team members: 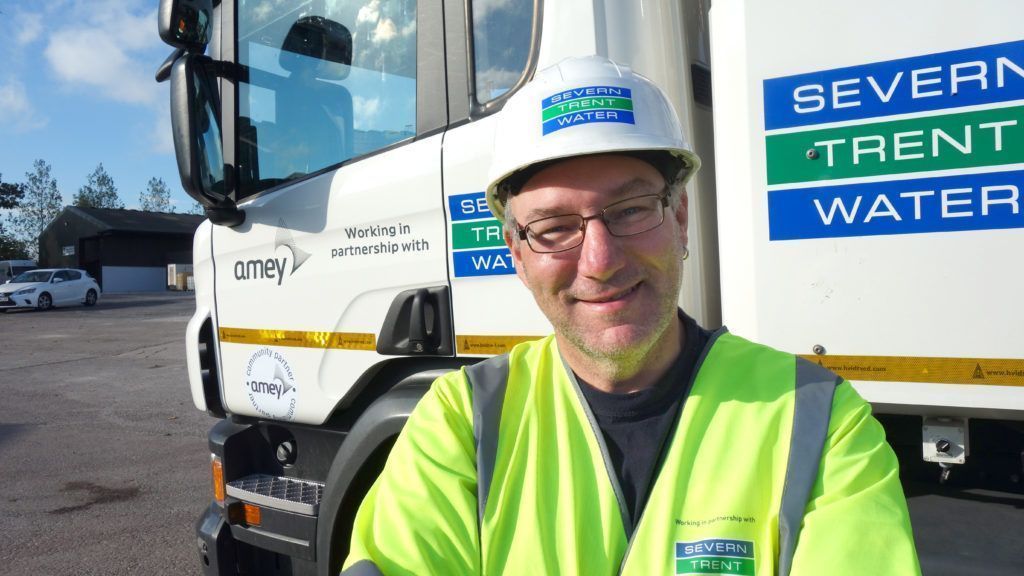 48-year-old Pete Owens, from Heath Hayes, Staffordshire, can be seen in Sewer Men working on a wet well – a giant underground water chamber – as part of a job in Penkridge.

Pete said: “I love my job, so I was pleased to show the film crew what we’re all about. Starting off with a big sewer cleaning challenge and ending the day with it spotless and free-flowing means we’ve achieved something.” 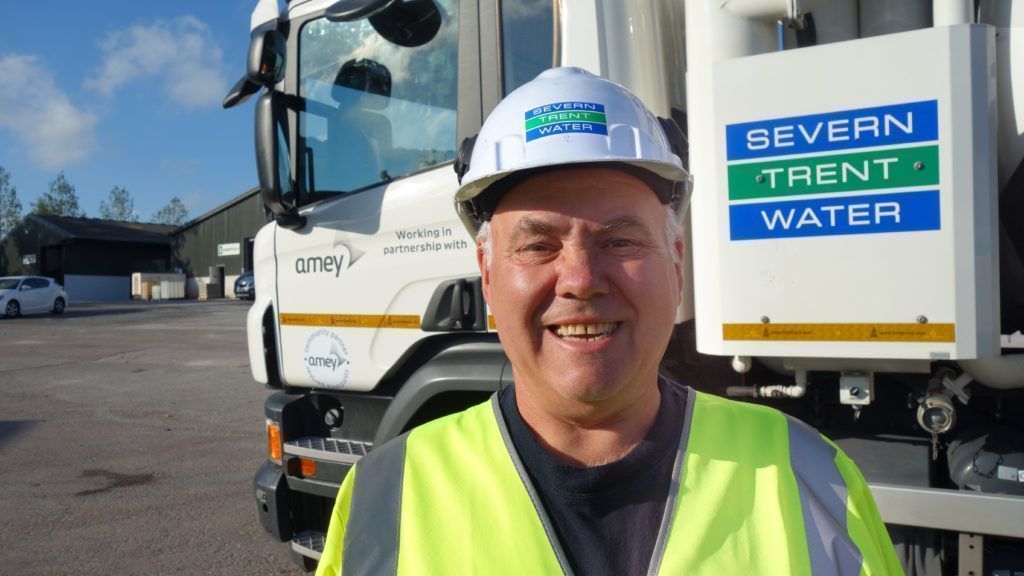 Shaun Adams can also be seen on Sewer Men, working on the Penkridge wet well job alongside Pete.

The 60-year-old pro from Hednesford, Staffordshire had this to say: “Working on a large wet well is a very technical process, with safety being the number one priority.

“I think most viewers will be impressed with what we do, and with the chance to see inside the sewer system. It will certainly open their eyes to the long journey their poo has to take from the toilet to the sewage works!” 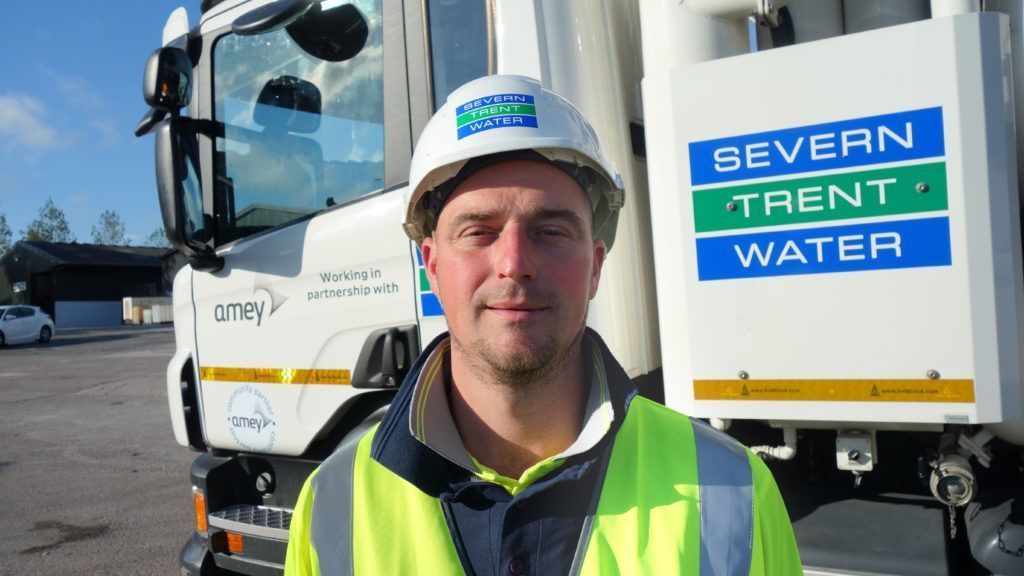 Sewer Men viewers can see our jetting engineer Mark Edwards, from Newcastle-under-Lyme, sucking hundreds of kilograms of fat filling a three-metre deep manhole in Burton upon Trent, helping to restore water flow to a clogged 60m sewer. Mark is another member of the Lanes team working with Severn Trent on the Amey contract.

The 37-year-old said: “The film crew knew about the Whitechapel fatberg that Lanes cleared in London, and wanted to show that there were similar problems across the UK.

“Fatbergs are made up of cooking oil and fat and lots of other material, such as wet wipes and sanitary products, that should never be disposed of down drains and sewers.

“Fat is the worst thing we deal with. It smells really bad and isn’t easy to clear. I hope seeing us having to deal with it will make people change their ways, so all this stuff is put where it should be – in the bin.” 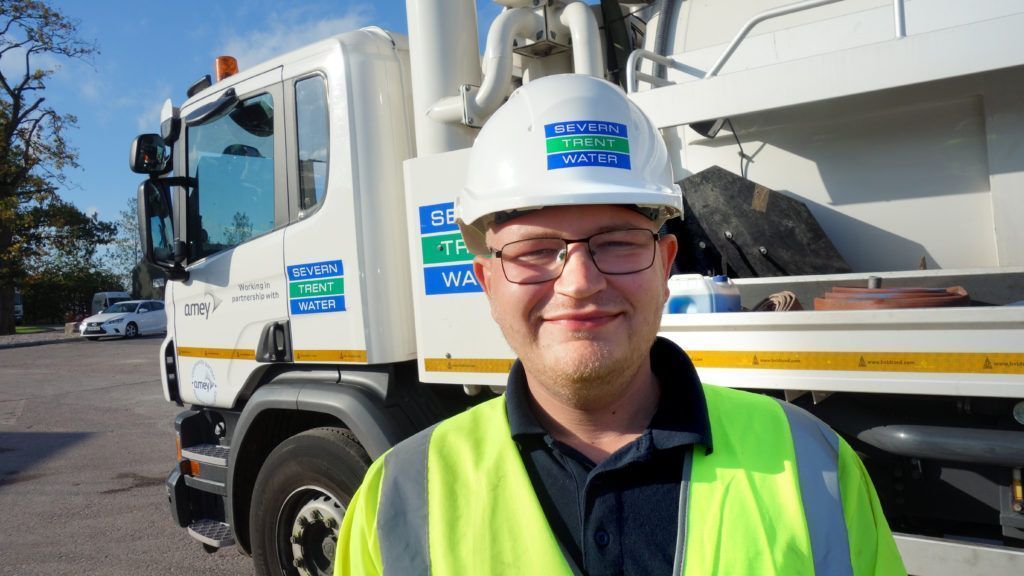 Fellow jetting engineer and fellow Amey contract worker Jack Wilcox, from Stoke-on-Trent, can be seen working with Mark to deal with the Burton upon Trent fatberg. The 21-year-old has just returned to the sewer maintenance sector after two years of working in other roles – and is loving his return to life at Lanes.

He said: “I missed the work and I missed the enjoyment of working with the team. I think the documentaries will show we put a shift in and do a lot of good, but also that we have a good laugh as well. There’s strong camaraderie at Lanes.” 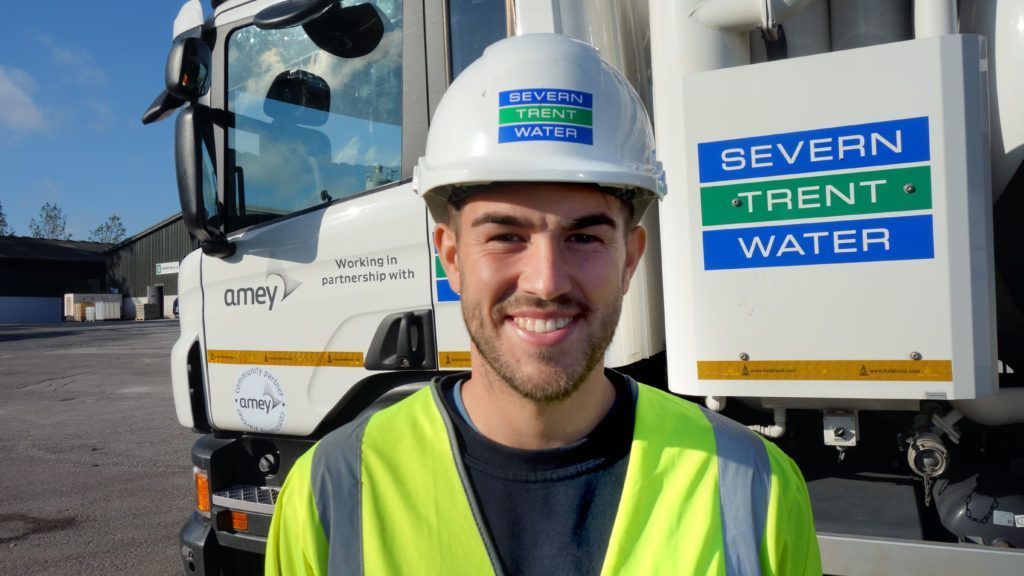 Former scaffolder Jake Coleman, from Erdington in Birmingham, has been with Lanes for around a year, and now works on the Amey contract with Severn Trent as part of Mark Davies’ team. Sewer Men viewers can watch him working alongside Mark and get an insight into what it takes to thrive in a Lanes Group career.

The 24-year-old said: “When I started a year ago, the sights and smells were a challenge, but I soon forgot about it. The job’s very interesting – no two days are the same, so I hope the films will make more people think about a career with Lanes.”

If you are interested in exploring drainage industry jobs after watching the Sewer Men documentary, then Lanes Group may be the place for you.

We are always on the lookout for talented candidates to join our ever-expanding team across the UK, and have a wide variety of roles available to suit all levels of prior experience. What’s more, we have a strong commitment to long-term career development, and provide all of our staff members with opportunities to develop their skills and broaden their prospects over time.

To get your Lanes career journey started, you can find out more about working for us, explore our full range of job listings, or get in touch with us to ask any questions you might have.