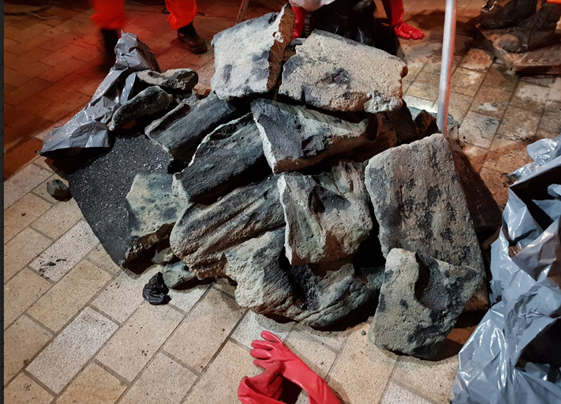 Christmas revellers and food businesses are being urged not to feed the fatbergs after Lanes Group sewer cleaning teams removed two giant waste monsters from beneath the streets of London.

The discoveries have prompted the water company to appeal to residents, visitors and food businesses help prevent fatbergs forming by not flushing oils, fats and grease (FOG) and other items, especially wipes, down drains.

Christmas and New Year is a time that can put a special strain on sewers as millions of people spend their time celebrating with food and drink.

To help address this problem, Lanes has created an animated film called Drains of Christmas Future in which a character called Ebenezer Sewage has a dream which teaches him a lesson about blocking sewers with fat.

It comes after the drainage and wastewater specialist launched the world’s first month-long campaign against sewer blockages.

Unblocktober appealed for people to take extra care of sewers to prevent blockages and plastic pollution. It was supported across the water industry, by many other businesses and environmental groups, and by thousands of people.

Thames Water say the discovery of the two fatbergs was a timely reminder for people to take care of how they dispose of cooking fat, especially from roast turkey and other meats, over the festive period.

Stephen Pattenden, Thames Water Network Manager, said: “Fatbergs are like monsters from the deep. The Lanes teams worked around the clock to defeat these two before they could cause damage to our customers or the environment.

“We’ve all seen the problems and damage they cause, and I’d therefore ask everyone to please make sure they don’t pour fats and oils down the sink. By letting the fat cool, putting it in a proper container like a glass jar and then in the bin stops a fatberg growing into a monster.”

He said: “The West End and the Borough Market area are among a number of sewer blockage hotspots across London. We spend a lot of time monitoring and working on these sewers.

“We discovered the fatberg under Borough Market in this way. We followed signs of fat in a main sewer and found it was coming from one 1145mm-diameter sewer joining onto it under Cathedral Street, near The Shard. The sewer was up to 90% blocked for 70 metres. It took us nearly three weeks to take out 30 tonnes of waste.”

The task involved high pressure water jetting and teams entering the sewer to use hand tools to hack off disgusting-smelling chunks of fat, which was combined with thousands of wipes, sanitary products and human waste.

The Pall Mall fatberg also contained several tonnes of concrete which had to be broken up using power tools and then carried out by hand.

Andy Howard said: “It only takes one person pouring a cup of fat down a sink, and someone else flushing some wipes down a toilet for a fatberg to be born. Once it has taken hold, it can grow to 30-tonne whopper in a matter of months.”

Thames Water has launched a campaign asking people to be ‘Everyday Sewper Heroes’ – by thinking twice about what they put down the drain. By making sure unflushables such as FOG, plastic wipes and cotton buds are binned means everyone is fighting the fatbergs.

It said fatbergs are a vivid reminder that, when it comes to drains, out of sight is not gone forever. Every year, Lanes supports Thames Water in dealing with 75,000 blockages across its sewer network at a cost of £18 million, many of which could be avoided.

Michelle Ringland, Head of Marketing at Lanes, said: “We support all our clients in reducing the menace of sewer blockages, which is why we have created our Ebenezer Sewage character. We can all change and make a difference.  “Unblocktober will return in 2020. It’s reached tens of thousands of people and is recognised as a good way to remind us of our responsibilities in protecting public assets and, especially, the environment. In time, we hope we can consign London’s fatbergs to the history books.”