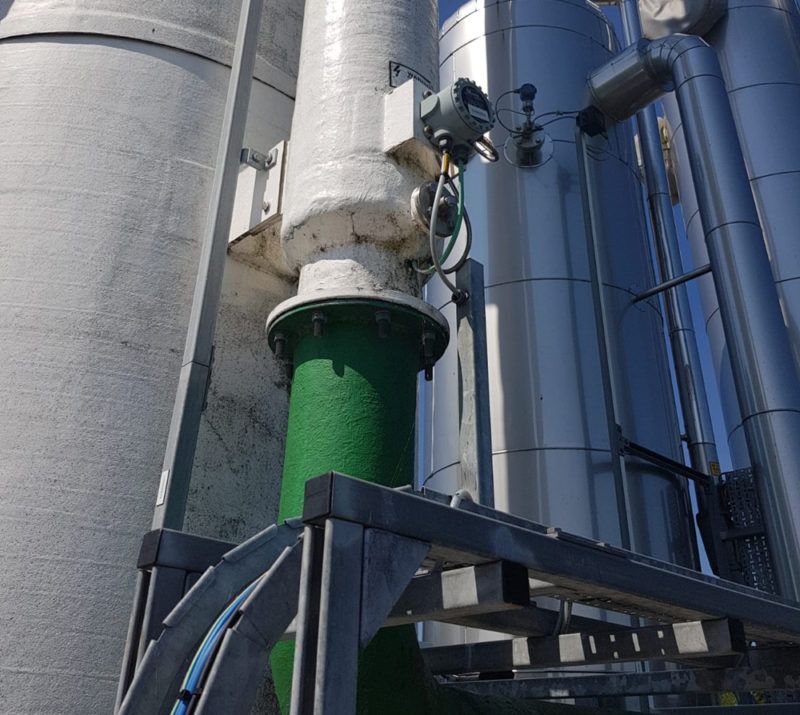 A CCTV camera system designed for surveying sewers has been put to a new use – investigating concerns about a pipe blockage at a gas plant.

Drainage engineers based at the Lanes Group plc depot in Aberdeen were called in to survey the gas pipe at the biogas generation plant near Coupar Angus, in Perth and Kinross.

Instead of being guided underground into a drain or sewer, a push-rod CCTV drainage camera was guided 15 metres up a large CO2 outlet pipe to try to locate the cause of a drop in flow of the CO2 vent line.

The plant’s bio-methane service manager selected Lanes sewer surveying expertise while visiting another plant and hearing how the drainage specialist had been called in to clean some pipes.

He said: “It was a bit of a lightbulb moment. I had thought our dip in flow rates might be caused by a pipe blockage so thought Lanes should be able to help.

“I called them on a Thursday, Lanes visited on Friday to scope the project, and they attended to carry out the pipe survey on the Monday. So, in terms of service delivery we got perfection.”

Prior to carrying out the survey, Colin Small and his team shut down the gas purification plant and purged it of methane gas.

The push-rod CCTV camera system is designed to be operated safely in sewer pipes that could contain volatile gases so both Lanes and Colin Small were confident the survey could be carried out safely.

Because the camera head was too large to fit through an access panel, a technician at the gas plant created a hole in the glass fibre gas pipe to allow it to be fed into the riser pipe.

Lanes CCTV Drainage Survey Engineers Colin Christie said: “I’ve used the same equipment to survey new gas pipes before, but not a pipe in a biogas plant. I fed the camera up through the pipe for 15 metres, but the HD video images we recorded showed no sign of a blockage.”

Colin Christie then uses a point lining kit – usually used to install a liner in a drain to rehabilitate a pipe – to carry out a temporary repair on the gas pipe by patching over the hole.

His namesake, Colin Small, said: “It was important for us to discount a blockage in the pipe, so Lanes’ support has been very important, and their service was excellent.

“I can see the versatility of their technology and its potential to be used in a variety of ways across anaerobic digestion and biomethane systems.”

Mark Morrice, Area Development Manager for the Lanes Aberdeen depot, said: “We’re very pleased to have been able to help Colin and his team.

“Our remote access CCTV camera technology is certainly very adaptable, and can be used to investigate process pipes, chambers, and tanks in a wide range of industrial applications.

“On top of that, Lanes drainage engineers are can-do people. We’ll always strive to do what it takes, safely and effectively, to find solutions to our client’s problems.”

In turn, it produces up to 780 m3 of gas per hour that is fed into the local gas grid for heating and cooking in the same way as conventional natural gas.