Grease is the word for Lanes engineers in college root problem 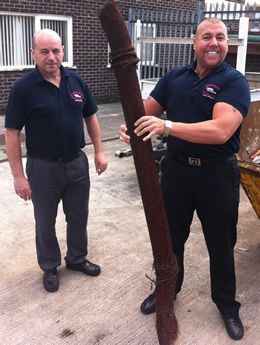 Lanes engineers have been praised for quickly getting to the root of a drain blockage at a college involving a build up of cooking fat – because the real culprit was a tree.

The team from Lanes Group’s regional depot in Bristol was called in to investigate a waste water drain blockage at a higher education college in Somerset.

Drainage engineer Dean Harris said: “We used our robotic HD camera to inspect the pipe and locate the blockage. About 50 metres along the drain line, we came across a build up of congealed fat.”

The fat had built up along a 30 metre section of the pipe, which takes kitchen and other foul water waste to the main sewer. At one point, 70% of the pipe was blocked.

The team deployed its powerful AquaWhale jet vac tanker to break up the fat and push it back out of the drain line, into the machine’s holding tank, ready for safe disposal.

Once the fat was cleared, the team discovered the initial cause of the blocked pipe problem, nearly 80 metres along the drainage line. A tree root had penetrated the pipe and then grown into a tangle of smaller matted roots.

Dean Harris said: “We blasted the tree root with the jet vac, making it disintegrate. The root could then be brought back out of the pipe in pieces. If jetting hadn’t worked, we could have used a machine called a KA TE cutter to cut away roots and relieve the drain blockage.”

Simon Bruton, Area Development Manager for Lanes for Drains in Bristol, said: “Once a tree root has penetrated a sewer pipe, waste mattercan quickly snag on it, causing a blockage like this.”

Lanes engineers followed up their drain unblocking work by repairing the pipe using a technique called CIPP, or cure in place pipe repair.

A fibre glass sleeve, impregnated with resin, was placed inside the pipe, covering the hole made by the root. The resin then hardened, creating a new smooth and waterproof pipe wall.

A member of the college’s estates management team praised Lanes engineers for their rapid response to the drain blockage.

He said: “We use Lanes Group because we know they have the expertise and capacity to manage issues like this. It’s important that our drainage system is in good order. During term-time, we have 2,000 students on campus at any one time, and we cannot risk our educational programme being disrupted in any way.”