Lanes for Drains at Marwell Wildlife 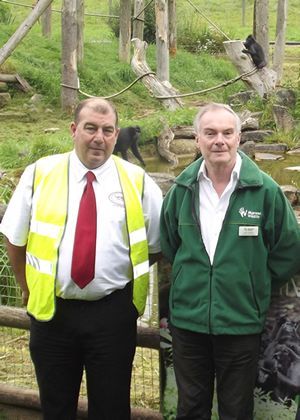 Lanes for Drains goes wild about giving good service – and proved the point when its engineers were called in to survey and repair the drainage system at the UK’s most famous wildlife conservation centre.

Lanes for Drains has carried out a full CCTV drainage survey and then a programme of remedial work at Marwell Wildlife, in Winchester, Hampshire.

The company’s engineers made sure they avoided disruption by working early in the morning, before the centre opened to the public, but they still had a very interested audience – a troupe of monkeys.

The monkeys were Sulawesi Crested Macaques, among the most critically endangered monkeys in Indonesia in South East Asia.

Tony Cutajar, manager of Lanes for Drains’ Southampton Depot, said: “We were working right outside their enclosure and drew a lot of interest from the monkeys themselves. Thankfully, we passed inspection.”

Marwell Wildlife, famed for its breeding programmes for endangered animals and work to conserve biodiversity, called in Lanes for Drains to carry out a full survey of its drainage system.

Engineers used a powerful jet vac to clean an 80 metre long drain that runs from the tiger enclosure to the rhino enclosure. Based on Lanes for Drains report and HD video evidence, Marwell Wildlife prepared a programme of works to carry out improvements and repairs.

Eight patches – tubes of glass fibre hardened with a special resin – were used to repair surface water drains at the centre’s entrance. Also, the fall in a foul water drain leading from a toilet block was extended to reduce the risk of blockages. Tree roots were also cut away from several drainage lines.

Tony Cutajar said: “We worked with Marwell Wildlife to try to minimise disruption. We scheduled work to take place before it opened in the morning and made sure it was completed before a half-term break, when it would have been particularly busy.

“Being able to help a charity that does such good work with endangered animals and being able to see the wildlife as well, was a real bonus for our teams. But our focus at all times was on doing the best job for the client.”

John Adams, Buildings Projects Manager at Marwell Wildlife, said: “The work was part of a planned remedial programme. Because we are open to the public and, obviously, have a good number of wild animals on site, we need to take particular care when selecting contractors.

“We needed a drainage contractor we could trust to have the capacity to work flexibly and quickly which is why we were pleased to appoint Lanes for Drains. Their proactive and professional approach was ideal.”