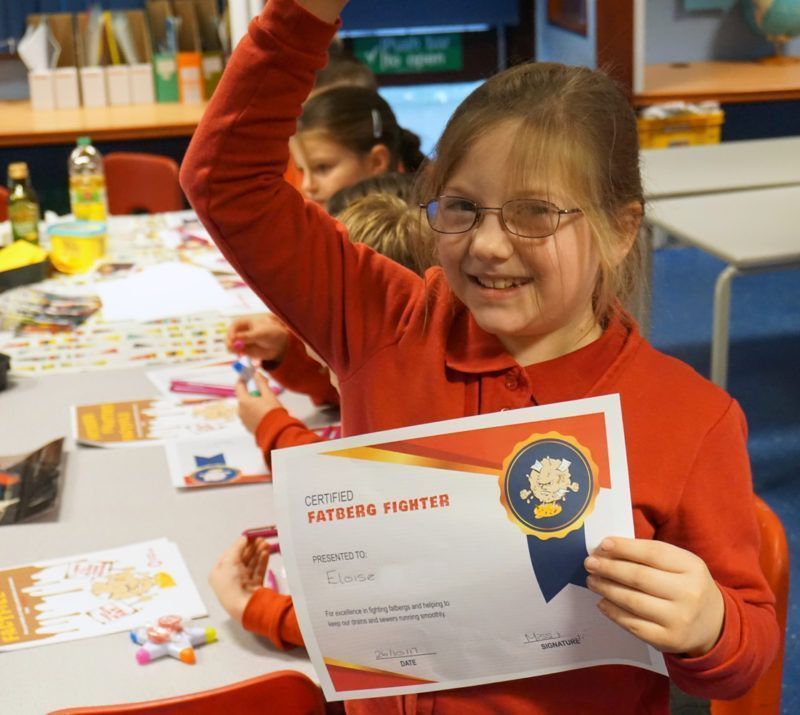 The UK’s largest independent drainage specialist is taking a new approach to teaching the British public about the dangers of blocking drains and sewers – by creating an army of ‘Fatberg Fighters’ in our schools.

Lanes Group Plc is making a long-term commitment to work with schools to educate children about the damage caused by disposing of fats, oils and grease (FOG) down the nation’s drains.

FOG combines with other everyday items, most notably disposable wipes, which are wrongly flushed down toilets in their millions each year, to create fatbergs that block sewers, and contribute to serious environmental harm.

Lanes Group’s ambitious Fatberg Fighter campaign aims to engage with school children aged 5 to 11 to challenge this behaviour, because they are often more receptive to new ideas and habits.

The company, which operates 32 depots and water utility hubs across the UK, and was responsible for clearing the notorious Whitechapel fatberg in London, has worked with qualified teachers to create a lesson plan about fatbergs.

Children will be invited to become ‘Fatberg Fighters’, and champion best practice, both at school and at home, in preventing the blocking of drains and sewers.

Lanes Group Director Andy Brierley said: “We recognise we need to challenge a prevailing culture and set of behaviours about what people put down drains, and that this is a long-term task.

“By working with schools, we can engage with our youngest citizens about the huge damage, disruption, and cost caused by the wrongful disposal of FOG, and wipes in particular, down sinks and toilets.

“We want to complement the excellent work being done by utility companies in their education programmes. While they tend to take a broader approach, we want to laser-guide our effort on challenging the root causes of fatbergs.

“Campaigns to make people wear seat belts in cars and prevent dogs fouling pavements show how hard it can be to change behaviours. But these efforts, ultimately, have been successful. We want to help do the same to dramatically reduce the harm caused by fatbergs.”

Lanes Group has developed and tested its Fatberg Fighter concept by working with three primary schools in North West England. It now plans to offer the lesson to schools across the UK. Key learning points covered include:

Children take part in a range of interactive experiments to show the mechanics of how fatbergs form, allowing teachers to explore concepts such as water flow, emulsification, and the effect of temperature on different materials.

They also get the chance to discover what is truly ‘flushable’, by creating their own makeshift toilet flushes in big buckets. At the end of each lesson, pupils are presented with Fatberg Fighter certificates.

The fatberg lesson has been enjoyed by pupils, and praised by teachers.

Ben Tagg, a Year Five teacher at Altrincham Preparatory School, said: “The next generation must be more environmentally-focused than any that have gone before them. Educating children about the effects of what they do in their own home will be vital in developing a sense of a ‘shared Earth’.

“Many of the pupils in the class didn’t fully understand the sewer and drains network before the lessons, with many openly admitting that they take it for granted. Only when discussing what would happen if our drains and sewers were blocked up did they fully appreciate their value to our society.

“Since the lessons, the students have informed me that they have now been watching their parents, when cooking, to see how they dispose of their waste oil and fat.”

Jenni Ringland, Foundation Stage Leader at Bacup Holy Trinity Stacksteads Primary School, said: “It’s important to educate children about what can and what can’t go down our drains, as they will hold on to that knowledge, and take it into adult life.

“The children said they would go home and tell their family what they can put down the drain. They really liked receiving their certificates. They’re fully fledged fatberg fighters now.”

Tom Waldron, a teacher at St Joseph’s Catholic Primary School Reddish, said: “The lesson has already made a difference. Two parents said their children came home telling them all about it, and quite a few of the children have already said they’ve stopped putting wipes and other things down the toilet.”

As the wastewater network services maintenance partner for Thames Water, Lanes Group cleared the 130-tonne fatberg in Whitechapel, in a process that took nearly two months, attracting the interest of millions of people around the world.

The company’s drainage engineers respond to thousands more drain and sewer blockages caused by FOG and wipes across the UK every month.

Andy Brierley said: “We want to empower the nation’s children to teach their families how to protect our drains and sewers, because many of us adults haven’t done a very good job of preventing fatbergs so far.”

A video from the day’s lesson at Bacup Holy Trinity Stacksteads has been produced by Lanes for Drains, and can be found here: