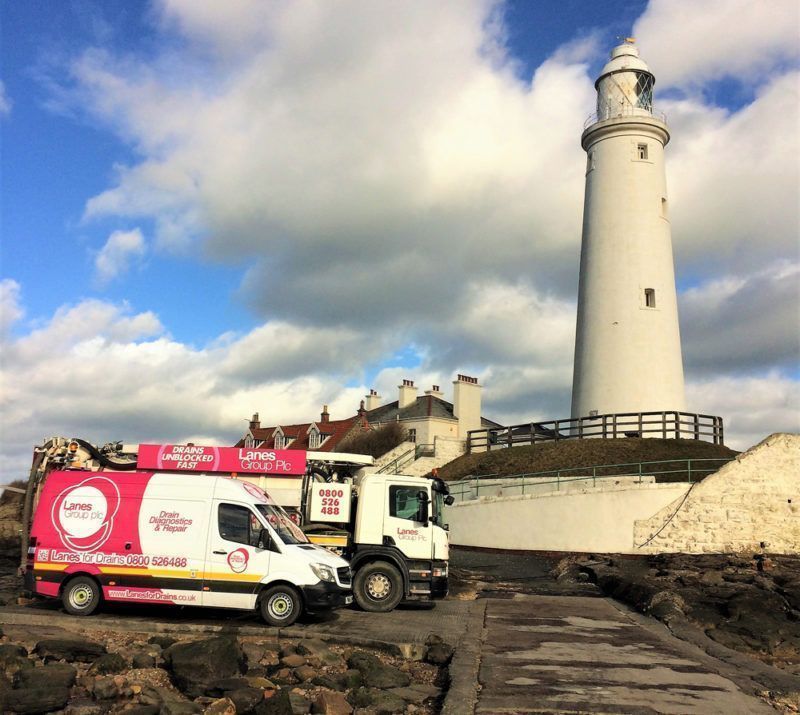 Drainage engineers at Lanes Group have beaten the tides to look deep into the sewer system of one of the UK’s most picturesque heritage lighthouses.

The team from Lanes’ Newcastle depot was commissioned to clean and survey the drains and sewers underneath the 119-year-old St Mary’s Lighthouse in Whitley Bay, Tyne and Wear.

The work was part of a wider scheme to upgrade and safeguard the Grade II-listed landmark, and enhance its role as an important tourist and educational centre.

A Lanes jet vac tanker and a mainline CCTV survey unit were deployed to carry out the work, with one key condition always in mind, the drainage engineers involved had to keep an eye on the tides.

Lanes Newcastle Area Development Manager Trevor Sawyer said: “The lighthouse is on an island, so access to it is governed by the coming and going of the tides.

“There is a causeway we could use to reach the lighthouse but we only had a specific window of time to work each day, if we didn’t want our vehicles to be marooned.

“We were able to clean and survey the entire drainage system on the island, which serves the lighthouse, the keepers’ cottages and various other buildings.”

David Brown, a partner at Beaumont Brown Architects, which is overseeing the conservation and development work, said: “Understanding the drainage, its location, depth, and purpose, is fundamental to our plans for the site.

“The drainage will have cut through archaeology, which we want to preserve. There are also four substantial underground rainwater collection tanks. We don’t fully understand why they were installed. We hope Lanes’ survey will help us answer these sorts of questions.”

North Tyneside Council, which owns the site, has been given £164,300 by the Heritage Lottery Fund for structural and ecological surveys of the site, and to develop a conservation plan.

The council plans to bid for a further £2.1m from the fund to enhance the site. This will include changing the internal layout of the keepers’ cottages, now a visitor centre, to improve toilet facilities, and to install a lift to improve disability access.

The original lighthouse optic is to be rebuilt. Also, extensions will be built to provide classrooms, exhibition space and a bigger shop.

The lighthouse was built on the site of an 11th-Century monastic chapel, whose monks maintained a lantern on the tower to alert passing boats of the danger of the rocks.