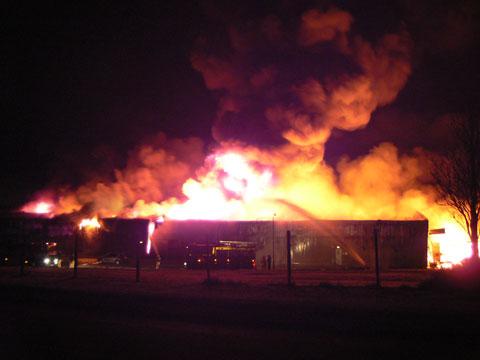 Lanes for Drains expertise in managing contamination emergencies is being used to protect natural water courses after a major factory fire in South Wales.

More than 60 firefighters tackled the blaze, being treated as arson, after it broke out at the factory run by Sirhowy Valley Foods, at 3.20am on September 20.

Realising that the fire posed a major contamination risk, Damian Tranter, Sales Manager for Lanes for Drains South Wales, attended the scene while fire crews were still tackling the flames.

He was able to give instant advice to management from the Tayto Group, owners of Sirhowy Valley Foods.

Damian Tranter said: “Because we are a national drainage specialist, we have expertise and experience in dealing with major fires like this.

“Following a site inspection, carried out while firefighters were still managing the emergency, we were able to advise on the best option for Tayto Group to seal the factory’s water system to prevent contamination.

“It’s important to do this before the fire service leaves the site because, from that point on, the owner of the property where the fire started is liable for the total cost of clearing up any external contamination, and could face punitive fines.

“We were also able to work closely with the Environment Agency, which has overall responsibility for preventing pollution, and also attended the scene.”

Within an hour of Tayto Group’s go-ahead, Lanes for Drains engineers were on site, sealing the drains leading from the factory, so no contaminated water could enter natural water courses.

The team from Lanes’ depot at Pontyclun, Mid Glamorgan, used expandable rubber and steel stoppers to plug the drainage lines leading from the factory.

Damian Tranter said: “We only charged £300 for this work, which is a small price to pay compared with the alternative – potential costs and fines running into hundreds of thousands of pounds if contamination occurs.”

While the clean-up operation was continuing, and a contamination risk remained, water building up inside the factory’s storm water and foul water systems was due to be pumped out and tankered away for safe disposal.

It was expected that more water than usual will be removed in this way, due to heavy rains that lashed south Wales after the fire.

As soon as the fire was detected, the factory was evacuated, with 20 workers led to safety. Up to three-quarters of the building was destroyed.

A 30-year-old man has appeared in court in connection with the fire, accused of arson with intent to endanger life.