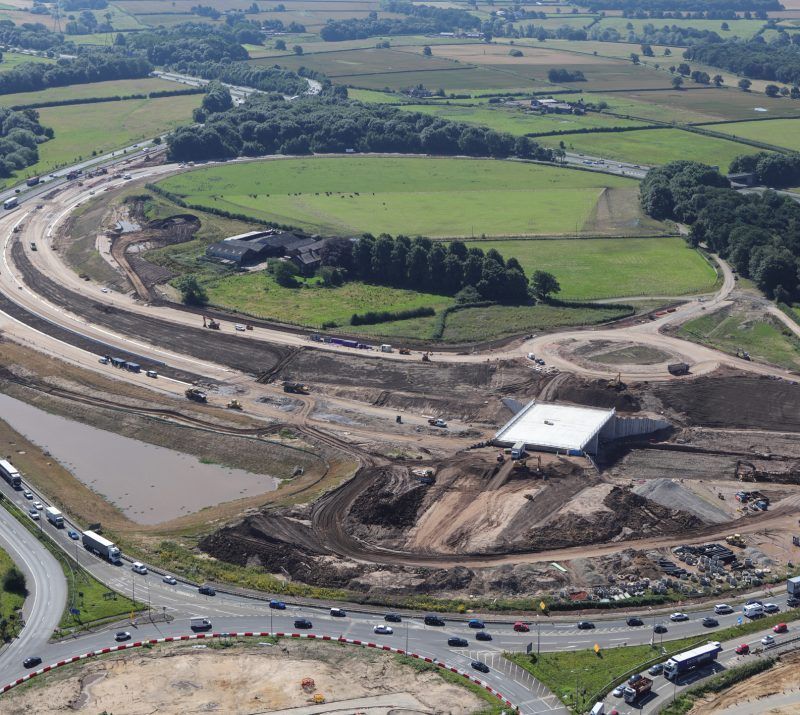 Drainage engineers from Lanes Group plc are coming to the end of a major programme of highways work to cure one of the worst road bottlenecks in the North West of England.

They have been supporting Highways England’s main contractor, Costain, in the development of a new 4.5-mile section of the A556 trunk road between Knutsford and Bowdon. The £192 million road runs from Junction 19 of the M6 to Junction 7 of the M56.

The current A556 is a main route off the M6 to south Manchester and Manchester Airport. It carries about 51,500 vehicles a day, 11% of them HGVs, and is frequently heavily congested, causing long delays and major problems for local residents.

For the last 18 months, Lanes Group’s Manchester depot has been providing specialist drainage services during the building of a new dual-carriageway that will relieve the current road of all through traffic, allowing it to be “de-trunked”.

Costain Agent Paul Sprague said: “Lanes Group has been supporting us very well, ensuring they are on site, with the right assets and expertise just when it’s needed. This is important to keep a large project like this on track.”

In the first phase, Lanes engineers carried out extensive CCTV drainage surveys of the existing drainage system along the route of the new road. This gave Costain’s civil engineers the data and mapping information they needed to ensure the design provided the most effective linkages with the road’s new drainage system.

As work on the new road progressed, they also carried out CCTV drainage surveys of the 30km-long network of new drainage pipes installed to manage surface water.

Throughout this process, Lanes also used jetting and vacuumation tankers to desilt both current highway drainage pipes, and the new ones, both of which can become filled with silt and debris during the construction process.

On one occasion, nine jet vac tankers were deployed at the same time to support works as the statutory undertaker, United Utilities, diverted a clean water main. The machines were needed to ensure there was enough capacity to tanker away water while the work was carried out.

Simon Roberts, Area Development Manager for Lanes Manchester, said: “One of the key benefits of commissioning Lanes Group for this kind of highways work is that we have a specialist drainage fleet large enough to handle such unusual scenarios.

“We also have the latest technology. For example, for standard work on the project, we regularly deployed recycler jet vac tankers, which filter their water, allowing them to stay on station for longer periods, increasing productivity and sustainability.

The new road is due to open in March 2017. Afterwards, Lanes Group will continue to support Costain as it de-trunks the old A556, which is currently a combination of a four-lane single-track road and dual-carriageway.

It will be narrowed to become a two-lane B road, with no access to traffic at its end closest to the M6. In the space created a cycle path and a horse-riding track will be created, and the remaining area landscaped to support wildlife and improve the area for local residents.