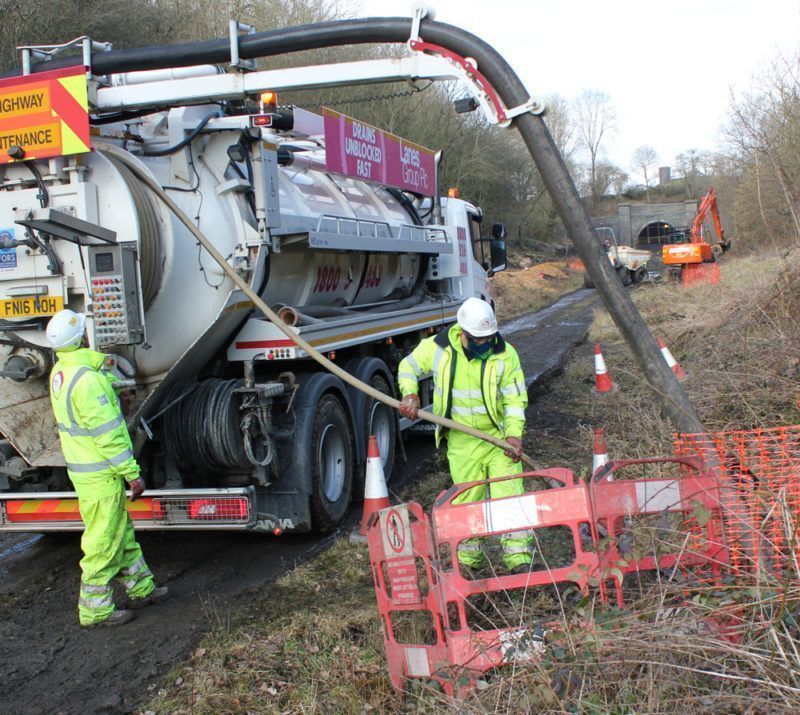 Drainage teams from Lanes Group plc have been commissioned to help turn a 1.7-mile-long Victorian rail tunnel into one of the world’s most unusual vehicle testing and research centres.

The disused Catesby Tunnel near Charwelton, six miles south of Daventry, Northamptonshire, is being transformed into the Catesby Aero Research Facility.

Once it is complete, its owner, Brackley-based Aero Research Partners (ARP), will hire out the facility to vehicle manufacturers and motor racing teams around the world.

Lanes Group is cleaning and surveying track drainage lines leading up to the tunnel on behalf of main contractor Stepnell, which has been charged with constructing the UK’s longest aerodynamic testing facility.

Mark Niland, Area Development Manager for the Lanes depot in Birmingham, said: “We’re very pleased to be asked to work on such an exciting and unusual project.

“In less than two years, the tunnel will be catapulted from the age of steam travel into playing a key role in progressing the age of electric power travel. That’s quite a transformation.

“We’ve deployed one of our advanced recycler jet vac tankers to support Stepnell. It can filter and reuse its water so can work for longer period on a site where there is no direct water supply, significantly improving productivity.”

A Lanes CCTV drainage survey team is also using a robotic camera to survey more than 1,500 metres of 225mm-diameter track drainage pipes either side of the tunnel.

Shane O’Connor, Works Manager for Stepnell, said: “The Lanes personnel have co-ordinated their work very well with our other teams, which is important because of the constraints imposed by working on disused rail line, where space is limited.

“The use of the jet vac recyclers has helped with this process because it minimises vehicle movements and means the Lanes drainage engineers can work more flexibly around our other groundworks teams.”

The tunnel, on the route of the former Great Central Main Line, is perfectly straight and lined with 30 million bricks. It opened in 1897 and closed in 1966.

When finished, the new test facility will be enclosed at both ends, with a smooth asphalt roadway, allowing vehicles to travel at over 100 mph before being prepared for another run on vehicle turntables.

The highly-controlled environment will allow accurate, repeatable testing of vehicle performance, aerodynamics, noise, emissions, and cooling. The site will also have a 4.5-acre science park, with offices, workshops and a university-led research facility, creating up to 50 jobs, and energising other business opportunities in the area.

Catesby Tunnel has been described as a “colossus”, built on the insistence of the owner of the Catesby Estate, Henry Arthur Attenborough, who opposed the original plan to run the line through a cutting across his land.

It was created by mining 290,000 cubic yards of material, and extended at a rate of 110 yards per month, a speed made possible by using steam-powered excavation equipment.

The tunnel is 2,997 yards long, 27 feet wide, and 25 feet 6 inches high. A prime objective of the line was to transport coal. Construction work began on 18 February 1895. The first coal train travelled through the tunnel on 25 July 1898.

Since the tunnel closed on 3 September 1966, there have been plans to reopen it, including creating a rail link from Aylesbury to a parkway station near the M1/M6 junction, a freight line linking Lille and Liverpool, and using it as a possible route for HS2.