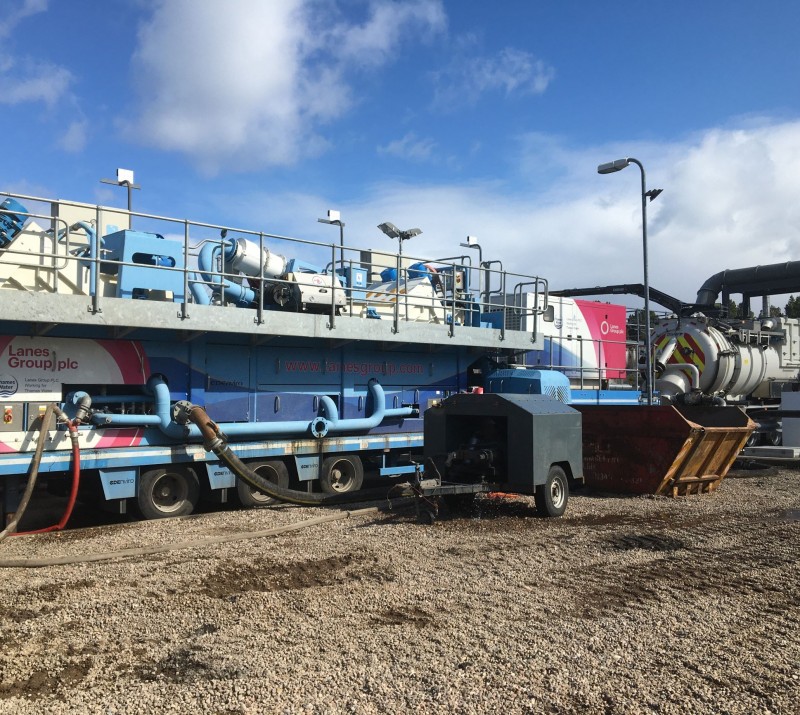 Lanes Group plc has completed a programme to clean giant sewage aeration tanks at three locations across Scotland using a mobile screening machine that slashes the amount of waste sent to landfill by up to 90 percent.

The Lanes Aberdeen depot has coordinated the project to use the company’s D:MAX trailer-mounted material screening system that can separate water and a range of other materials in sewage.

The technology provides a highly sustainable way to support faster and more flexible tank cleaning that reduces costs for clients and the length of time tanks have to be taken out of service to be cleaned.

Lanes Aberdeen Contracts Manager Neil Biggerstaff said: “Our client was very pleased and impressed with the quality of service we could provide using the mobile sewage screener.

“De-watering sludge in this way helps our clients reduce their carbon footprint as well as provide significant operational advantages. It can also create new revenue streams for separated waste materials.

“The client commented on how hard and safely the Lanes team worked to meet the tight deadlines needed to get the tanks back in service so wastewater processing was not disrupted.”

The project involved cleaning large sewage batch reactor (SBR) tanks, each one about seven metres deep, which are critical to the process of treating raw sewage.

The tank cleaning was carried out at three sites over three weeks. At two sites, with the Lanes team working 12-hour day shifts at the first two sites and two 12-hour shifts 24 hours a day at the final site.

Each SBR tank was emptied of water. A Lanes DISAB super suction vacuumation tanker was then used to lift the heavy sludge and grit that remained at the bottom.

This was then passed straight on to the D:MAX screener which separated the sludge into water, silt and grit, which enters sewers via surface drains, and rag, a combination of toilet tissue residue and sanitary products and wipes which are wrongly flushed down toilets.

Over the three-week project, around 400 tonnes of sludge was passed through the screener, which removed 90% of the water from the silt and grit and a minimum of 70% from the rag.

The silt and grit could be sent for reuse as aggregate in agriculture or as backfill in groundworks. The remaining rag, a fraction of the waste removed from the tanks, was sent for landfill.

“Pre-screening sludge waste has great advantages in other sectors, for example to remove grit that would otherwise clog anaerobic digestion plants and to separate waste generated in a number of process industries, allowing more materials to be reused and recycled.”