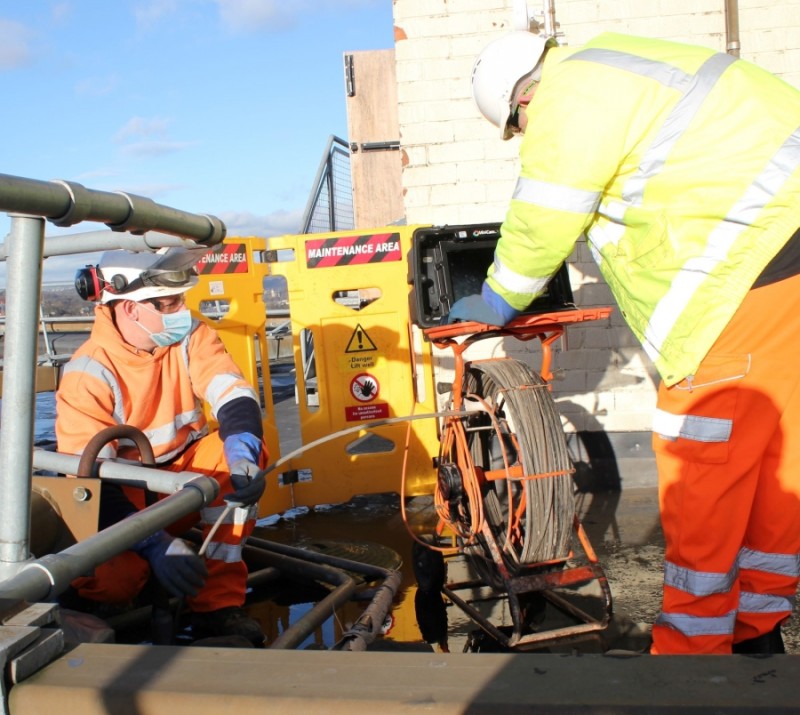 A team of drainage engineers from Lanes Group plc have completed a project to clean and survey downpipes on blocks of flats in the centre of Bradford.

The drain jetting and CCTV drainage survey work was needed as part of planned maintenance to prevent water from collecting on the roof of the buildings, from where it could seep into flats below.

Housing association In Communities commissioned the Lanes Leeds depot to carry out the work on five residential towers off Barkerend Road in Wapping, Bradford, West Yorkshire.

Lanes Leeds Area Development Manager Andrew Tattersall said: “We were very pleased to be asked to carry out this work for In Communities to maintain the integrity of the drainage system.

“Since the eight-storey blocks were built, climate change has made weather patterns more volatile with much heavier bursts of rainfall than were planned for in the original design specifications.

“This means the buildings’ drainage systems need to be closely monitored and maintained to a high level to ensure they can cope with the much larger volumes of water landing on the roofs.”

Lanes deployed a CCTV drainage survey unit and a jet vac tanker to carry out the work. Its teams are experienced at working in live environments and have systems in place to ensure all operations and safe and COVID-19 secure.

The drainage engineers took a flexible rod CCTV survey reel to the roof of each building, from where it could be guided down multiple drainage access points into the 100mm iron downpipes.

The CCTV drainage engineer used the system to capture HD quality video images of the pipe all the way to the ground.

Where blockage problems were identified, a jetting hose could be brought to the roof from the jet vac tanker below, and used to clean the pipe, ensuring it was clear and able to take the maximum volume of water.

The video footage formed part of a CCTV report for each tower block, detailing the position of each downpipe and its condition. In Communities can use the surveys to inform future maintenance programmes.

Andrew Tattersall said: “The are various ways downpipes can become blocked, including a build-up of mineral and rust deposits, leaves and other organic debris, and nesting birds.

“Where defects are found, Lanes has a range of remote access repair systems to deal with them cost-effectively, including full lining and patch lining and removal of blockages with robotic cutters.”