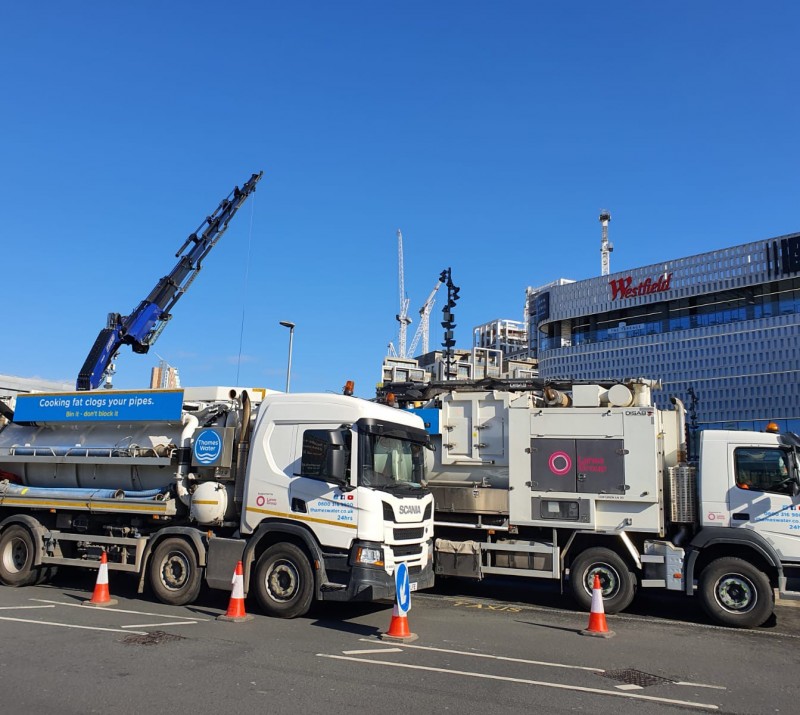 They used their high volume vacuumation and jetting technology to clear debris from the pumping station at Westfield London in White City to allow the repair to be made.

The wet wells cleaning team is part of the Lanes utilities division that is the wastewater network services partner for Thames Water, the UK’s largest water company.

Pump maintenance contractors, also working for Thames Water, needed the Lanes team’s support to drain and clean the pumping station to replace rails that hold the pumps in the wet well.

Lewis Kirrage, LMC Wet Wells Supervisor for Lanes, said: “Ordinarily, this work would have been done at night, when flows through the pumping station were at their lowest.

“But we were able to complete the project safely during the day, in part, because footfall in Westfield London was reduced by the coronavirus outbreak, lowering the load on sewers serving the centre.”

The wet well cleaning team deployed a DISAB wet and dry high volume vacuumation tanker and a Superflex jet vac tanker, as well as an independent breathing apparatus unit, to support the project.

The wet well, which was 12 metres deep, was drained down. A Lanes wastewater engineer then made a confined space entry to guide the process of removing waste that had built up around the pumps.

The DISAB unit’s vacuumation hose and the Superflex’s jetting hose were lowered into the well then attached to the arm of a lorry-mounted crane to stabilise them during the work.

An estimated 2.5 tonnes of sludge and compacted waste was vacuumed from the chamber. It included silt, rubble and a mixture of oils, fats and grease, called FOG.

A material known as rag was also removed. This is made up of decomposed wet wipes, sanitary products, nappies and other consumer products, most of which contain plastics, which are wrongly flushed down toilets.

The process was monitored by the wet well cleaning team’s confined space rescue team, equipped with breathing apparatus sets. A gas monitor was also used to continuously check for hazardous gases in the well.

Once the wet well had been cleaned, the lorry-mounted crane was used to lift the pumps to the surface. The defective guide rails were lifted out and new rails installed before the pumps were lowered back into place.

Lewis Kirrage said: “We must be prepared for all eventualities when carrying out these wet well cleaning projects because we don’t know what conditions we’ll be facing.

The Lanes wet wells cleaning team has been developed over the last two years. It works on between two and five wet wells per shift, on average, mostly in London.

They include a pumping station at Thames Water’s Abbey Mills water treatment works in Stratford, East London, which is 26m deep, 20m wide and 10m long. Capable of handling 97,000 litres of sewage a second, it is the largest pumping station in Europe.

Lewis Kirrage said: “Through the development of this team, Lanes now has a very significant amount of know-how and capability to safely support Thames Water’s wet well maintenance programme.

“Much of the work is complex and requires very detailed planning and close collaborative working with multiple supply partners in Thames Water’s supply chain. Working together, whatever we face, we can deal with.”