Andy’s jobs journey reaches fulfilment down in the sewers 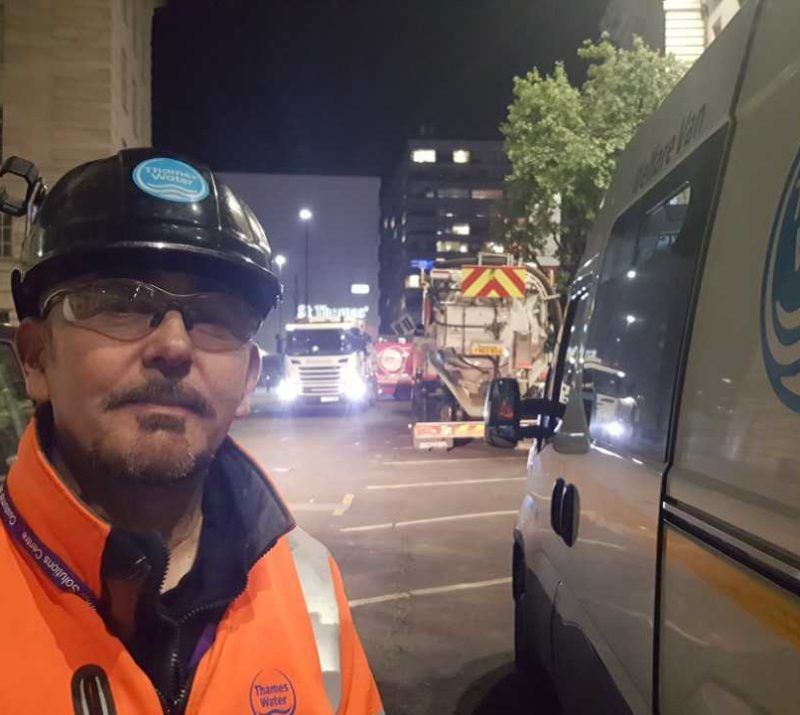 Doing a favour for a friend led to a job working for Lanes Group plc – now Andy Howard has the career he always really wanted, and that includes tackling giant sewer bergs made from fat and concrete.

In 2012, the former HGV company boss agreed to take his best mate to a job interview with drainage and utilities specialist Lanes and ended up being interviewed himself.

He was offered a job on the spot as a jet vac tanker operator assistant. Seven years on, he has progressed to be the special projects manager responsible for tackling London’s largest ever concreteberg.

Andy led the Lanes emergency team, working on behalf of Thames Water, that first responded to the discovery, in April 2019, of the giant tube of concrete in a Victorian brick-lined sewer under Goswell Road, Islington.

He is now responsible for keeping the sewers flowing while the rock-hard material – thought to weigh up to 105 tonnes – is removed.

Andy said: “We’ve had to survey 550 metres of truck sewer and clean 350 metres of it as part of a contingency plan that has involved diverting wastewater from the Goswell Road sewer into another main sewer.

“We’re also having to monitor flows twice a day and will probably have to clean the sewers again regularly while a major civil engineering project is put in place to remove the concrete.

“Working on the sewer system is endlessly fascinating. Every problem is different, and everything is interconnected. It’s a bit like a Rubik’s Cube.

“You often have to take two steps to the left to go one step to the right and two more steps ahead. When you solve the puzzle, there’s a lot of job satisfaction.”

Before joining Lanes, the list of Andy’s work experience was impressive indeed. He has been a chef, a soldier in the Army, a van driver, a steel erector, and a concrete piling operative.

Andy, aged 50, said: “I’ve done all sorts of jobs in my time, but none of them have been as fulfilling as this one. If Lanes had been doing this work 30 years ago, and I had joined then, I think I’d still be with them now.

“It’s a fantastic job. Every day is different. I’m still learning new things, and through Lanes I’ve had a whole raft of training, including a City & Guilds Level 5 in Engineering and IOSH Managing Safely.

“I’m so glad I was at a loose end, because taking my mate to the interview was the best thing I ever did. There is no such thing as a boring day in this job. I wouldn’t do anything else now.”

After training and working as a jet vac tanker assistant, learning from the experienced operatives around him, Andy was given his own tanker. “I had the licence already, so it was a natural step,” he explains.

“But it wasn’t the same as standard HGV work. Driving is just a means of getting from A to B. The interesting stuff, which give real job satisfaction, starts at the end of the journey.

Next, Andy became a technical specialist, then a field manager in the special projects team, and now he works as a Special Projects Manager in his own right.

He works with flexible teams of colleagues to solve some of the toughest challenges on the Thames Water wastewater network service – keeping the sewers, drains and wet wells flowing for 15 million customers.

As a special projects manager, it is Andy’s responsibility to get to the scene of wastewater emergencies, assess the situation, put in a well-resourced plan to solve the problem, working in partnership with Thames Water, and manage it through to a successful and safe conclusion.

Andy has been on a journey of one form or another all his life, a lot of it behind the wheel of a lorry. Now that career journey is continuing beneath the streets of London, and he could not be happier.

He says: “I’ve progressed well at Lanes. But I’m not the exception by any means. If you show the aptitude and get the job done, there are lots of opportunities, supported by great training and qualifications.”