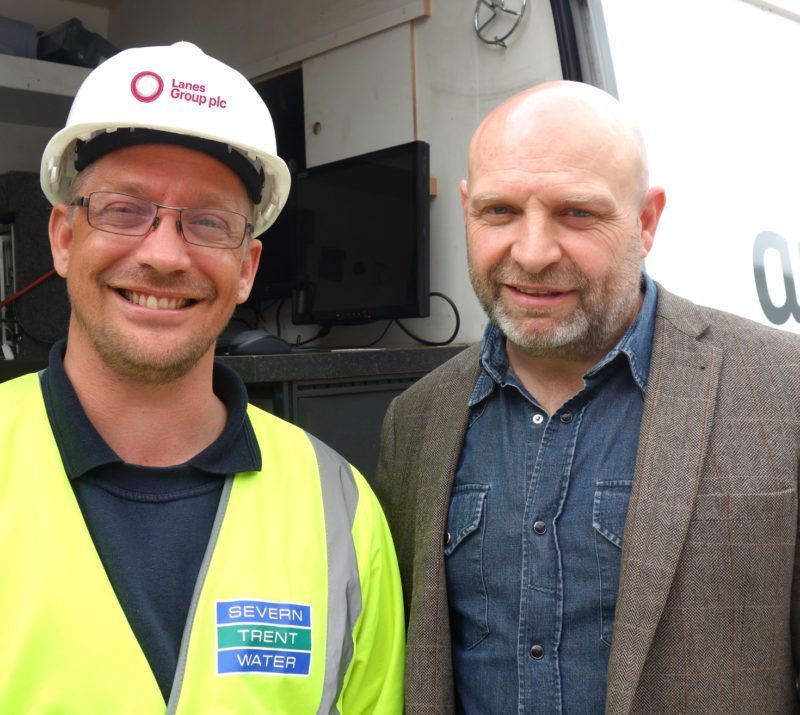 Antony McCartney, left, with Lanes contract manager Glyn Bickerstaffe, who gave Antony a job when he was homeless and living rough in a park.

A homeless man with cerebral palsy who had been living rough in a tent in a town park has had his life transformed after Lanes Group plc gave him a job as a drainage engineer.

Antony McCartney began sleeping rough on Boxing Day 2015 after his relationship broke down and he had to leave the home he had shared with his partner and their teenage son.

The ground engineering worker had been out of work at the time. Because he was of no fixed abode he could not claim benefits so began sleeping in a tent in a park in the centre of Stafford, Staffordshire. He relied on food banks and soup kitchens for food.

Then his cousin tipped him off about a possible job as a drainage engineer for Lanes Group, so he walked the nine miles to the Lanes water utility hub near Stowe-by-Chartley to ask they would take him on.

Antony said: “I must have looked quite a sight. I had holes in my jeans. My jumper was full of conifer needles. Living rough for nearly two months does nothing for your appearance.

“But the contract manager, Glyn Bickerstaffe, took me in, sat me down and gave me an interview, and gave me a tour of the depot. He told me there was a reactive drainage engineer’s job going, and would I like it? And I said when can I start!”

Since Antony started at Lanes, he has been promoted to be a CCTV drainage survey engineer, has saved up and bought a house, and is living with a new partner, with whom he is about to have a child.

Antony said: “Everything I have now is down to Lanes taking a chance on me. I love my job and working here. It’s like having an extended family. It’s the first place I’ve worked where I feel I’m wanted, and I want to repay that loyalty.

“When most people say their lives have gone down the drain, it’s a bad thing. For me, it was like my salvation!”

Antony had gained a Higher National Certificate (HNC) then a Higher National Diploma (HND) in construction and the built environment. At the time his relationship broke down he had been accepted on a degree course to study architectural technology.

Now, though, he wants to build a career at the Lanes Stafford utility hub, which supports Amey in providing wastewater network maintenance services for Severn Trent Water.

Lanes Contract Manager Glyn Bickerstaffe said Antony has become a highly-valued member of the team and has come a long way in a short space of time.

He added: “It was a surprise to have someone knocking at the door looking for work. Our hub is out of the way on a farm. I could see Antony was a bit down on his luck, I just didn’t know quite how far down. But when I heard he had walked all the way from Stafford on spec, I was more than happy to interview him.

“It was clear he had something about him. He’s very bright and keen and had a very good understanding of the civils work from his previous jobs and studying, so I was very pleased to offer him a job.

“He has since repaid our trust many times over, and it’s fantastic to see someone rise up from a very difficult place. His approach to work and life is an inspiration, to be honest. He’s a valued member of the team.”

Despite having mild cerebral palsy, which reveals itself by Antony having a slight limp, he can do all the manual handling tasks expected of him safely and effectively, thanks, in part, to the safe systems of work used by Lanes.

For some months he also shadowed an experienced drainage engineer to learn from his skills and gain confidence, and he has had extensive on-the-job training and support since he has joined Lanes.

After his interview, Glyn drove Antony back into Stafford, and dropped him off at a supermarket – Antony did not want to reveal he was living in a tent.

After getting the job at Lanes, he could afford to move into a charity hostel, where he lived for two months, before renting his own home.

Antony said: “When I started at Lanes I knew nothing about drains and sewers. But thanks to the training plan I was put on, and the great experience I’ve gained, I am now helping train new colleagues.

“There are lots of opportunities for advancement at Lanes, so now I have the opportunity for a long career. The sky’s the limit. Life is good.”