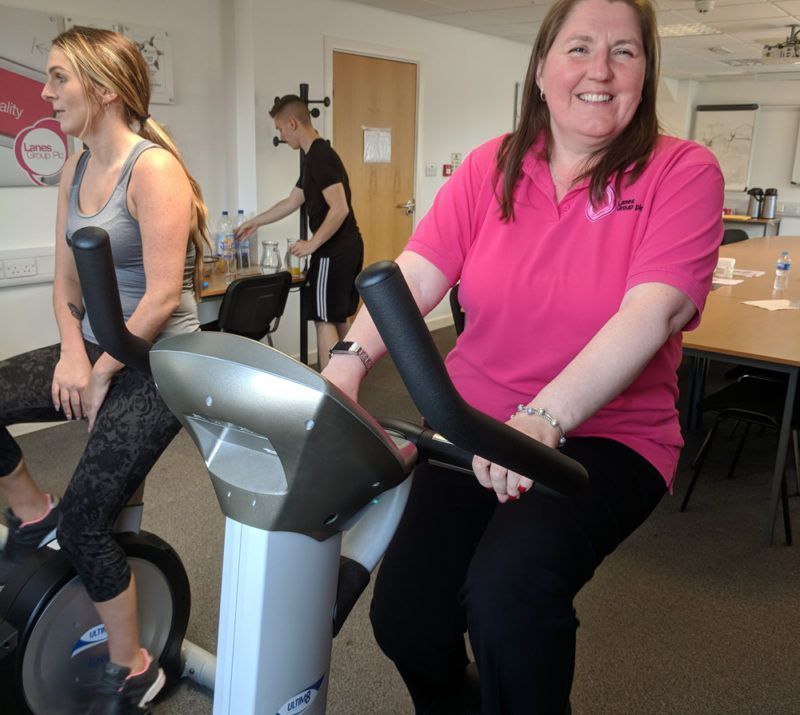 Just over a year after Janine Mills nearly died at work she has taken part in a fundraising cycle organised by Lanes Group plc on behalf of the charity seeking a cure for the illness that nearly killed her.

Colleagues trained in emergency first aid immediately went to her aid. They had a heart defibrillator, provided by Lanes, ready to use.  Moments later, a paramedic arrived and applied an ambulance service defibrillator, instead, to shock Janine’s heart and keep her alive.

When she arrived at Salford Royal Hospital, her heart stopped beating for two minutes before A&E medics revived her. Janine, from Swinton, it was found, had been struck down by sarcoidosis.

The inflammatory disease attacks internal organs, most notably the lungs, but also the heart. Until she collapsed in March 2017, Janine had been fit and well.  She had just been on a lunchtime walk with a colleague.

Now her heart has lost 40 per cent of its capacity. She must take steroids to reduce the risk of scar damage to her heart and lungs, and make sure she does not exert herself with strenuous exercise.

Yet Janine, pictured above, who returned to work in January 2018 after a period of rehabilitation and rest, was determined to take part in the charity cycle ride, alongside colleagues, because money was being raised for SarcoidosisUK.

The charity funds research seeking a cure for the illness and supports people who have it and their families.

Janine said: “I knew I had to join the Cycle Challenge because I and my family have already benefited from attending SarcoidosisUK meetings.

“I thought I would cycle for two minutes, but felt okay, so went on to do six minutes before I felt I should stop. It’s good for me to exercise, but I’ve been told I should never let my heart rate go above 100.”

Lanes Group, the UK’s largest independent drainage company, is holding a national Cycle Challenge, in which teams across the UK pedal the distance along local geographic landmarks on exercise bikes.

In Manchester, that meant 30 Lanes employees, including Janine, clocked up at least 204 kilometres between them, the length of the Leeds and Liverpool canal.

The Cycle Challenge is raising cash for five charities the company is supporting for the next five years, with Lanes matching all money raised by its teams pound-for-pound.

Along with SarcoidosisUK, money is being raised for the Stroke Association, Mind, The Jack and Jill Children’s Foundation, and The Sick Children’s Trust.

Janine’s husband, Brian, has also supported the cause, raising £1,300 for SarcoidosisUK by cycling from Manchester to Blackpool.

Lanes Head of Marketing Michelle Ringland said: “Janine’s willingness to take part in our Cycle Challenge reflects her determination to fight back against a terrible illness.

“We’re so glad we had trained first aiders and life-saving equipment in place ready to help Janine when she fell ill. Now, we’re all working hard to fund research into the disease to try to prevent the disease and find a cure for people like Janine.”

Sarcoidosis is caused by lumps of inflamed cells, called granulomas, developing at different sites within the body. It often affects the lungs but can also affect the skin, eyes, joints, nervous system, heart and other body parts.

In most cases, the illness is mild, and people recover with no need for treatment. However, in a minority of extreme cases, sarcoidosis can be fatal or cause long-term debilitating illness.