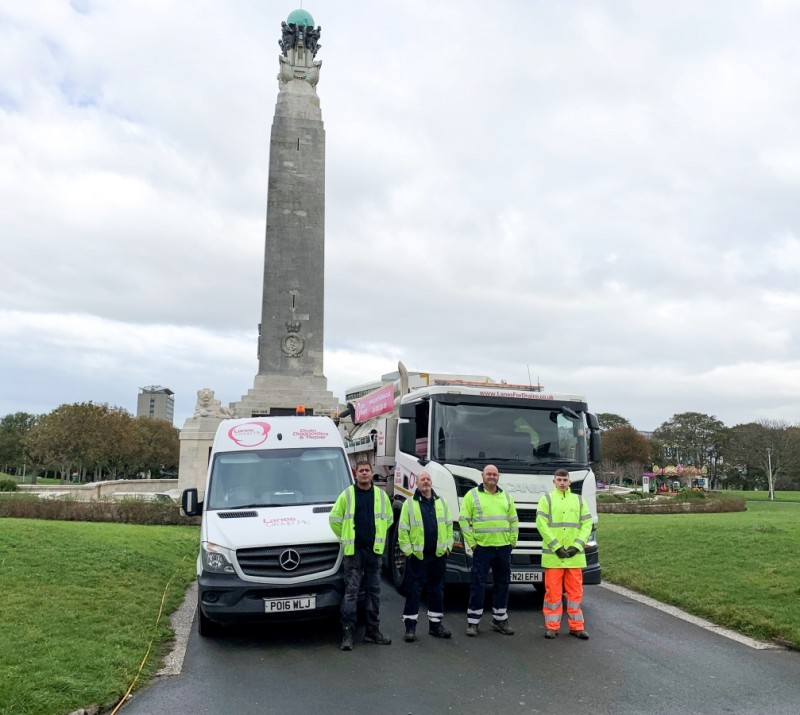 Drainage engineers from Lanes Group plc have cleaned surface water gullies around one of the UK’s most important Naval memorials so it is ready for Remembrance Sunday ceremonies.

The CWGC Plymouth Naval Memorial, on The Hoe, in the centre of the city, commemorates the 23,184 sailors who lost their lives at sea during World War 1 and World War 2.

The Commonwealth War Graves Commission (CWGC), which is responsible for the memorial, called in Lanes Group to clean gully pots and surface water channels ahead of Remembrance Sunday.

Remembrance Day is Thursday 11th November 2021. But the main event, including a large parade, will be held at the naval memorial  at 11am on the following Remembrance Sunday.

Mark Penelrick, Area Development Manager for the Lanes Plymouth depot, said: “We were pleased to be able to help make sure the memorial will be ready for this important annual remembrance event.

“The site has a lot of flat stone areas and as Remembrance Day comes at the height of the autumn leaf fall season, it’s important to make sure the surface water drainage is working well.

“Pooling water increases the risk of slips and trips, which is particularly hazardous for elderly veterans and their families attending. In a worst case, it could prevent such an event taking place. Therefore, it was very sensible to make sure the gullies were clear and working effectively.”

Most of the drainage channels are beneath the Grade I listed historical monument making using remote access water jetting the only way to keep them clear.

The Plymouth Naval Memorial is one of three identical memorials built after World War 1. The others are at Portsmouth and Chatham. They were designed by architect Robert Lorimer, with sculpture by Henry Poole.

The CWGC commemorates 1.7m casualties from the two world wars at 23,000 sites and more than 150 countries.