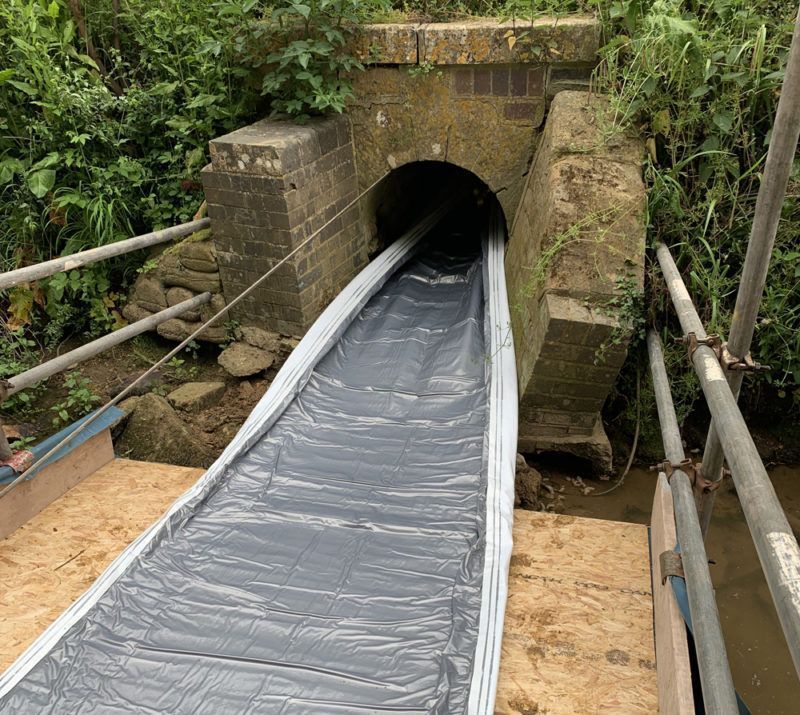 A drainage rehabilitation team from Lanes Group plc has used the latest ultraviolet lining technology to strengthen a culvert under a railway line in Oxfordshire.

The 14mm-thick liner is designed to give the culvert additional structural resilience, as well as prevent water seepage along its length.

Paul Henderson, Business Development Manager for the Lanes Lining and Sewer Rehabilitation Division, said: “The success of this project demonstrates the benefits of using the most advanced technology to renew and protect culverts and sewers.

“We can safely and rapidly renew pipes up to 1800mm in diameter in any lengths, giving them a design life of up to 100 years, as is required by Network Rail on its track assets.”

Five Lanes lining personnel worked in partnership alongside colleagues from their client, Balfour Beatty, working on behalf of Network Rail, to complete the culvert rehabilitation project in just over two days.

Balfour Beatty provided a controller of site safety (COSS) and a site warden. Its track team also helped prepare the worksite. The culvert, which was 20 metres from a level crossing, was accessed through a farmer’s field.

At Lanes’ request and to its lining team’s specification, scaffolding contractors were commissioned to create a scaffold bridge across a brook and up to the downstream end of the culvert.

This provided Lanes with a safe and stable platform from which they could guide the liner into the culvert.

Because space around the upstream end of the culvert was constrained, the 1.8-tonne liner was reverse pulled up the culvert.

This involved running the cable attached to the liner up the culvert, around a roller and back down the culvert to a winch.

With the liner in place, it could be inflated with compressed air, then the new ProKASRO dual core UV light train was sent through to cure the resin layers within it.

The computer-controlled light train was fitted with eight 1000-watt UV bulbs which completed the curing process in two and a half hours.

The UV lining project was completed with the liner being cut back to the headwalls at both ends. Balfour Beatty then grouted the liner ends as part of additional brick repointing works.