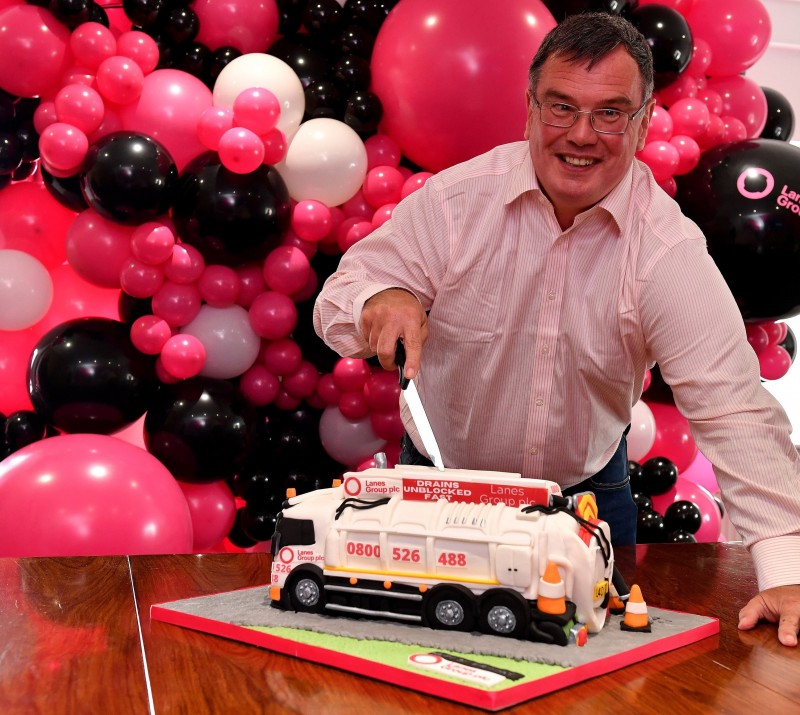 Lanes Group plc Chief Executive Wayne Earnshaw has marked the 30th anniversary of the company his father founded by making the first cut in a cake shaped like a jet vac tanker.

The UK’s largest independent drainage and wastewater specialist operates hundreds of the specialist vehicles that can clean sewers and suck up waste for safe disposal.

So it was perfectly apt that the cake baked to mark the 30th anniversary looked like a mini version of the eye-catching pink and white tanker lorries that have become an increasingly common sight on roads across the UK.

Wayne Earnshaw said: “We’re proud of what Lanes has achieved over the last three decades, delivering drainage services on behalf of many water companies, tens of thousands of businesses and millions of people.

“Over the years, those services have been delivered by many thousands of dedicated and highly professional people, including our current teams. So we will be celebrating their contributions over the rest of 2022.”

What began as drainage company with one depot in Leeds, West Yorkshire, has since grown rapidly to operate more than 35 service depots and utility hubs, and a turnover of over £300million.

In 2020, the company launched its latest business venture, setting up Lanes Infrastructure to deliver excavation and ducting installation services for the broadband industry.

The Lanes-i launch has been a big success, with the business building a rapidly growing portfolio of contracts, aided by an innovative business model that combines digital operational systems with industry-leading safety and quality standards.