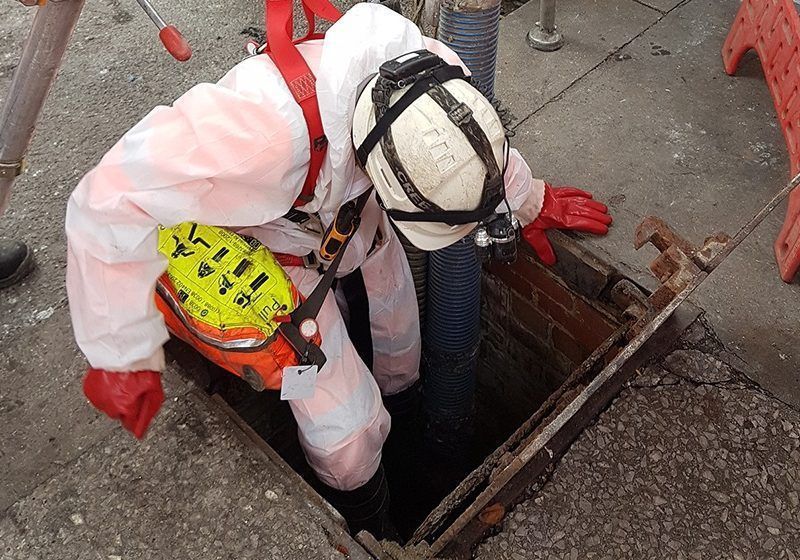 A popular TV show revealing the grimy side of life in Britain is preparing to show wastewater engineers working for Lanes Group battling fatbergs in London sewers.

The highly-skilled and dedicated sewer ‘flushers’ were filmed tackling the large fat blockages on behalf of Thames Water for the documentary series Grime and Punishment.

Major challenges they face removing tonnes of cooking oil, fat and grease, congealed with wet wipes and other debris, are due to be revealed on the prime-time Channel 5 programme.

The new series of Grime and Punishment begins on Thursday June 13th 2019 at 8pm. The Lanes and Thames Water sewer cleaning team is scheduled to be shown in action in episode 2 on 20th June.

Lanes is the wastewater network service maintenance partner for Thames Water. Its trunk sewer walking team is at the forefront of efforts to keep London’s sewers flowing freely.

Andy Howard, the Special Projects Manager who plans and oversees their work, said: “We hope the programme will give an up-front and in your face insight into what it takes to remove other people’s waste from sewers.

“It takes professionalism, not least in terms of safe working, and a good dollop of humour to wade through a working day up to your knees in fat, wipes and poo, so I’m sure the programme will be very watchable.”

One sewer cleaning project filmed by the documentary makers needed a team of 10 personnel, using high-tech jetting and vacuumation equipment and a lot of elbow grease to clear a sewer that was 50% blocked with fat.

It took two days to clear the blockage along a 12-metre length of Victorian egg-shaped brick sewer in Rotherhithe, South East London, which was 1.2 metres high and 0.8 metres wide.

Lanes personnel wore mini digital camera to show viewers what conditions were like inside the sewer as they shovelled tonnes of gloopy fat into a powerful vacuumation hose.

Thames Water hopes the programme will encourage more people to observe its request to ‘Bin it – don’t block it’ to keep sewers clear of unnecessary waste.

Andy Howard said: “I’m sure many viewers will find it entertaining, but I hope it also makes them think twice before pouring oils and fats down sinks and flushing wipes down toilets. If they didn’t it would make our jobs a lot easier.”