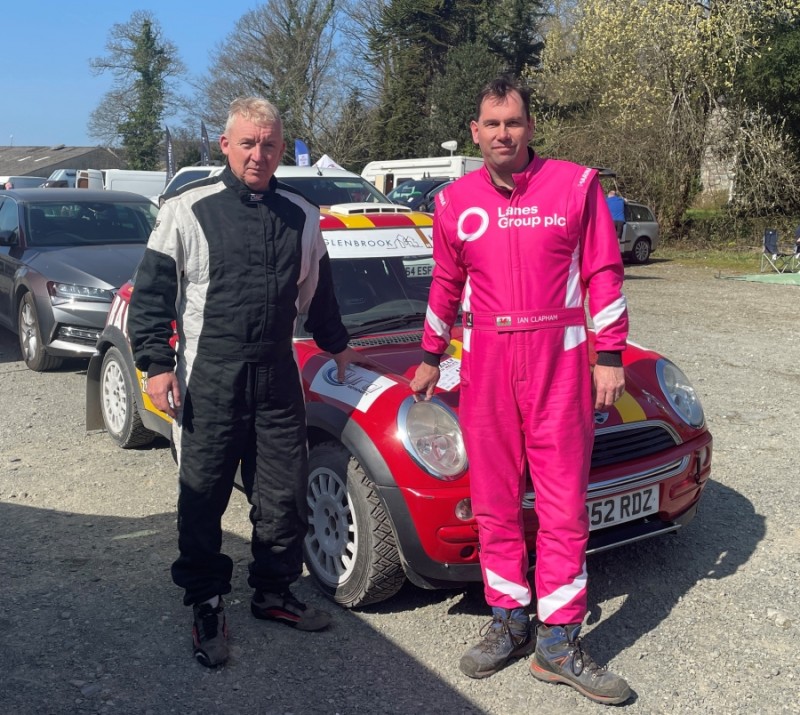 One of Lanes Group plc’s longest-serving sales managers has swapped directing jet vac tankers to customer worksites for guiding a rally car at hair-raising speeds around the forests of Wales.

Ian Clapham, Area Development Manager for the North West region, is reviving his career as an amateur rallying navigator, giving his driver directions as they hurtle along remote gravel roads.

Lanes is supporting Ian’s love for speed and sideways driving by sponsoring his rally driving suit, made out of appropriately pink material.

Ian said: “I competed as a rally navigator quite a few years ago now and I wanted to give it another go, so I’m please I can give Lanes some exposure – however fleeting – as we fly by spectators!

“It’s a combination of adrenaline and fierce concentration on the job in hand that I really like. To be honest, I’m so busy trying to keep us going in the right direction that I don’t have time to be scared.”

Competing in Rally North Wales on Saturday 26th March, Ian guided his driver, Mark Gallatley, to 6th place out of 15 entries in the Mini Challenge.

The four competition stages took them through the Pantperthog, Dyfi, Big Ray and Gartheiniog forests, south of Dolgellau.

Ian says: “It was a positive result, given that it was our first forest rally and I was working off maps rather than the pace notes that more established navigators can use.”

Not one to rest on his laurels, on the same day, Ian then travelled to Mold in North Wales to help marshal Hero Challenge One, a rally for vintage cars organised by the Historic Endurance Rallying Organisation.

And then he drove – at a sedate pace – to Shropshire, to compete in the Moonlite Rally between Shrewsbury and Church Stretton, organised by the Telford Auto Club.

There, he and his second driver of the day, Sam Wilson, competing in an MG ZR, finished 9th overall and 3rd in their class – Novice – over a 70-mile course featuring a series of time-trial stages.

The next competition is the Stockport Motor Club SMC Stages at Anglesey Racing Circuit on the 10th April.

If you plan to attend as a spectator, look out of the tell-tale flash of pink!