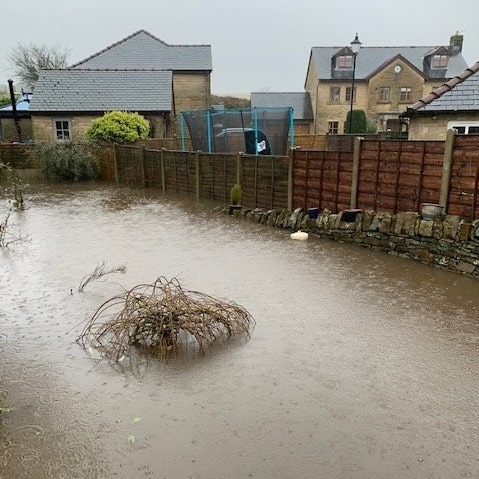 The measures are designed to divert thousands of gallons of water that had been inundating two houses near Blackburn in Lancashire up to three times a year.

Dave and Julia Mangan, who own one of the properties, hope the new drainage system will protect their garden which, in recent years, has been repeatedly submerged in up to six feet of water.

They blame climate change plus the recent diversion of water courses near their home for the repeated flooding they have endured.

David Mangan said: “For the first 10 years we’ve lived here there was no flooding, but then our gardens started to flood with greater frequency. We’ve had two in the last four months alone.

“We’re keen gardeners, so seeing our plants regularly destroyed and our property inundated with mud is very upsetting, and costly. During the last flood our neighbours had to knock down an ornamental wall or the water would have flooded their home.”

David, a safety specialist working in the sports and events industries, added: “Lanes has done a tremendous job. Their team really grafted to put in place the new drainage. It hasn’t been tested yet, but we’re confident it’ll make a big difference in protecting our properties.”

The two homes are on a hill in the Pennines. During storms, water gushes through a stone wall into the garden of the Mangans’ neighbour then bursts through a fence into their property.

The solution devised by the drainage excavation team at the Lanes Manchester depot, installed over a two-week period, makes use of a 1000mm diameter circular concrete culvert that runs through Dave and Julia Mangan’s garden.

Drainage engineers used a sonde location device and a remote access CCTV drain survey camera to plot the course of the culvert. The drainage investigation identified a buried manhole that provided access into the culvert.

The Lanes team extended this chamber to create a riser into the Mangans’ garden and topped it with a grated manhole cover that allows large volumes of surface water to drain into the culvert.

Another 150mm diameter pipe has been installed to divert water from another part of the garden into the same chamber.

Finally, Lanes has created an open sump to collect the rainwater as it  enters the neighbour’s garden through the stone boundary wall. This water is then diverted through another newly-installed 450mm diameter dual core plastic drain pipe into the culvert via the same modified chamber.

“In their case, having a culvert running through their garden was fortuitous and we hope the measures we’ve put in place will go a long way to managing future water volumes, especially when the problems with the upstream water courses are also resolved.

“If other property owners are noticing increasing problems with rain water, such as more frequent flash flooding, slower water run-off and water pooling we would recommend that they get in touch with us.

“They may be signs of an underlying drainage problem that might one day result in sudden and catastrophic flooding that could devastate property, causing huge cost, disruption and distress.”

With the flood prevention measures in place, Julia and David Mangan are investing in their garden with renewed confidence, putting in place new patios and paths. “Thanks to Lanes, we can have the garden how we want it again,” said Dave.

“We’re sure our efforts and money won’t be washed away during the next storm. That’s very reassuring. We’re looking forward to a dry and hopefully sunny summer in our garden.”