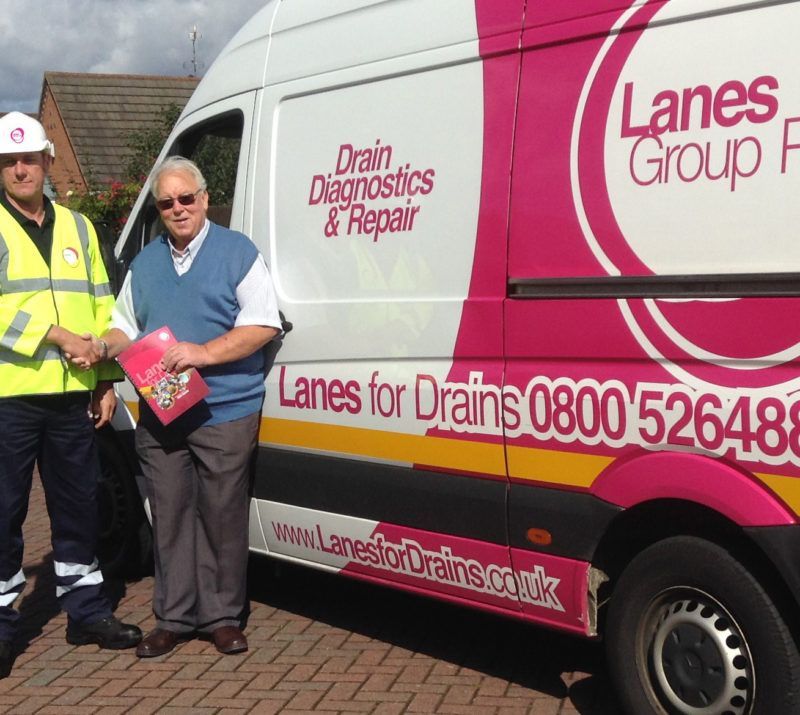 Lanes Group drainage engineers based in Sheffield have been praised for their urgent response in solving drainage problems at a house just days before it was due to be sold.

He said: “Everyone at Lanes swung into action to make sure the house sale could proceed as planned. Their professionalism, customer service and speed of action was truly impressive”

“I was in quite a vulnerable position, but the Lanes engineers and office staff were supportive throughout. Having seen the extent of the repairs needed, I could not believe they could be rectified so quickly”

“Not only did Lanes Group carry out a very thorough and high quality job, they also worked closely with me to control costs. I cannot praise them highly enough. They were excellent”

The problems for Mick began two weeks before the planned contract exchange date for the sale of the £350,000 property in South Yorkshire. The buyer enquired about the condition of the drainage system and the septic tank, issues that had not been raised before.

To satisfy this enquiry Mick called the Lanes depot in Greenland, Sheffield, to carry out a CCTV camera drainage survey.

It revealed that the property’s drainage system, made up of 225mm diameter clay pipes, had a large number of faults, namely tree root infestation, cracked pipes and dislocated joints.

Aware of the urgency of the situation, the Lanes team quickly put together a quote to carry out the repairs, so that the drainage system would be in good working order and defect-free in time for the sale to be completed.

Even so, timescales were extremely tight. The Lanes depot scheduled work to start imminently. With the work underway, the exchange of the sales contracts could take place, and completion of the sale was achieved in accordance with the purchaser’s requirements.

He said: “The CCTV survey showed that the pipe work had a large number of faults. Three of the damaged sections were located beneath parts of the property, so not easy to reach.

“We try to avoid carrying out excavations for drainage repairs at the best of times, because it causes additional disruption and cost. But this was a case where our no-dig expertise really came into its own.”

The first job was for Lanes Group jet vac tanker crew Garry Bisby and Steve Cox to use their powerful water jetting equipment to cut through a large number of well-established tree roots which had broken through a section of pipe. They also cleaned silt and debris from the drain lines.

These are fibreglass sleeves impregnated with resin, which are moved into place inside the pipe, covering the broken section, then pushed against the pipe with an inflatable packer. The sleeve is then left to harden to create a new tough and waterproof pipe wall.

The team then turned their attention to the property’s septic tank, which turned out to be unusually large, and very full. A total of 18,000 litres of sewage waste was sucked out, and taken away for disposal at an authorised waste site.

Scott said: “We wanted to do everything we could for Mick, to keep the house sale on track. Though there were a lot of problems to fix, everything went smoothly.

“We planned each step carefully, to make sure each patch liner worked and created a high quality repair. It should have really been a four-day job, but we completed in two and a half days. We’re very glad it went so well.”

Another key element of the project was the need to always keep the client informed of developments, a task shared between Scott, office administrator Sara Coley, and Shona Robertson, the depot’s area development manager.

A relieved Mick Rabbitt said: “It was clearly a great team effort and I was mightily pleased to have Lanes on the job. They were excellent. Their good work meant the sale of the house was completed as originally planned.”