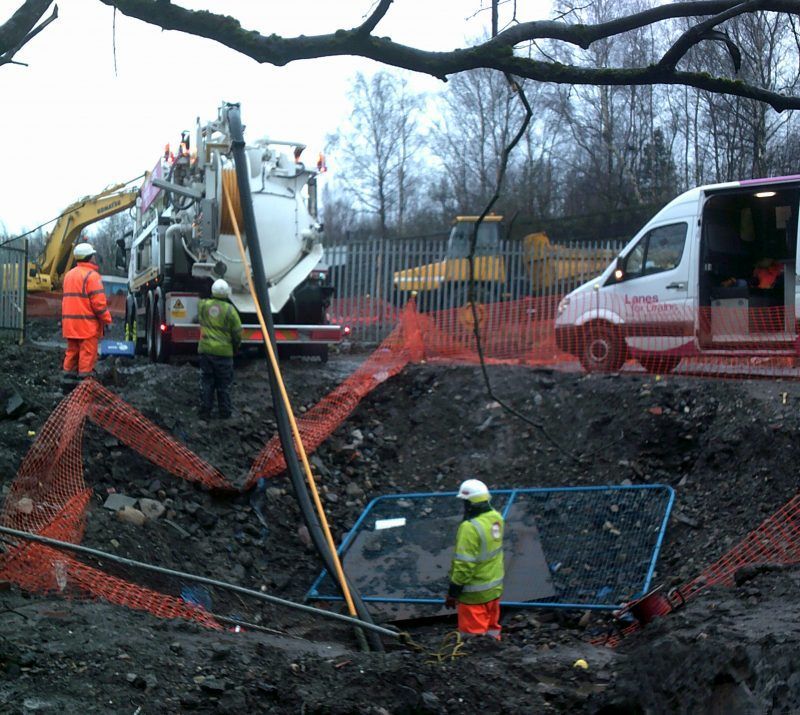 Lanes Group’s Cardiff depot has been commissioned to clear more than 100 tonnes of silt from a large storm drain as part of the Morfa Distributor Road project.

Its drainage team is using a brand new JHL recycling jet vac tanker – one of the most powerful specialist drainage vehicles of its kind – to complete the task.

The new dual carriageway is designed to boost regeneration of the Tawe Riverside Corridor, and runs from the Liberty Stadium for 1.7km to New Cut Road.

The 200m-long storm drain, which is between 600mm and 900mm in diameter, is due to be connected to the new surface water drainage system for the road.

However, it was found to be up to 80 per cent full of silt, so it has to be cleansed to ensure it can take the additional water flow that will be generated by the new road.

The road building project’s main contractor, T Richard Jones, turned to Lanes Group after one attempt to clear the pipe had failed.

“Their recycler jet vac tanker is working very well, and we expect to have the pipe cleared in 10 working days. We’re impressed with the technology and the conscientious approach taken by the Lanes personnel.

“The alternatives would be to clear the pipe manually though confined space entry, or install a completely new pipe. Neither option was acceptable due to safety, additional cost and time pressure.

“By working with Lanes, we will meet our project deadlines and be able to pass on significant cost-savings to our client, Swansea City Council, which is an excellent outcome.”
David Lewis, Area Development Manager for Lanes Cardiff, said: “Lanes Group has one of the largest fleet of recycling jet vac tankers in the UK, and we now added another to our fleet at our Cardiff depot.

“They deliver two key benefits – more powerful jetting and vacuumation performance, and the ability to reuse their water, so they can stay on station working for longer without leaving site to refill with water.

“That way, they can tackle the toughest blockage and desilting tasks in the shortest possible time, while delivering cost savings to the client, and using less water and fuel. We’re very pleased to be able to support such an important regeneration project in this way.”

The Morfa Distributor Road will improve access to jobs and services, open the corridor to development, reduce congestion and air quality problems on the A4067 Neath Road in the Hafod and improve walking and cycling links.