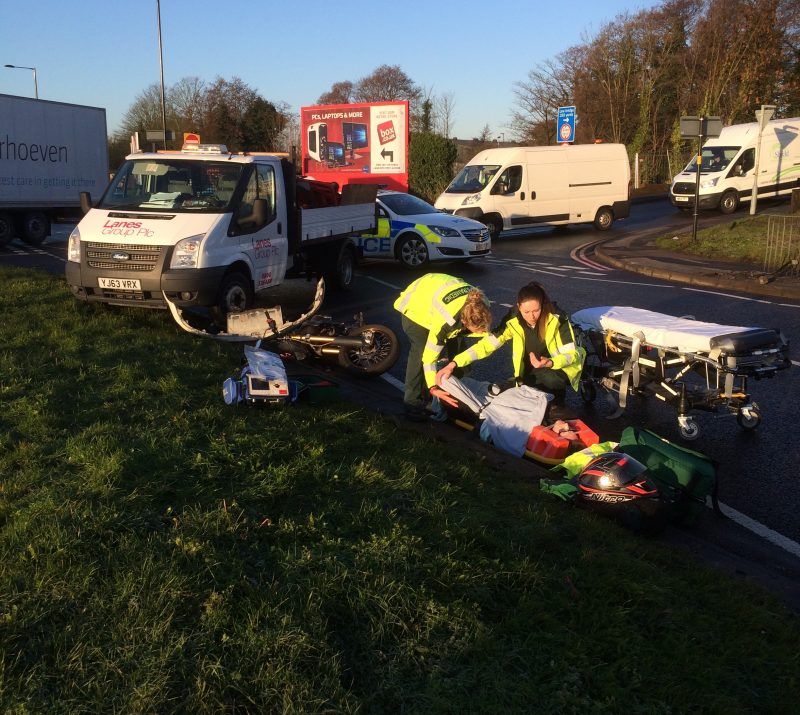 Two Lanes Group engineers came to the aid of a motorcyclist who was left lying injured in the middle of the road after he was involved in a collision with a car.

Quick-thinking Excavation Engineer Dan Perry pulled his pick-up truck across the carriageway to protect the motorcyclist – while his assistant, Carl Treen, jumped from the vehicle and went to help the stricken rider.

Dan called 999 to alert the emergency services, then the pair stayed at the scene – their vehicle continuing to protect the crash site – while paramedics worked on the injured man and police investigated the collision.

The incident happened soon after 8am this morning (Thursday 18 February) in the middle of the rush hour on the A38 dual carriageway at Minworth, Birmingham.

Dan and Carl had just left the Birmingham depot nearby when they witnessed the collision.

Carl said: “The car and motorcycle collided which sent the rider flying. He landed in the middle of the carriageway. It was a real shock.”

Dan said: “My first thought was that another vehicle could go over the rider so I pulled our truck in front of him and his bike to block the carriageway to protect him, and put my hazards and beacon light on to warn other drivers. Conditions were icy so vehicles might not have been able to stop in time otherwise.”

While Dan called 999, Carl went to help the injured motorcyclist. He said: “He was talking which I was glad to see. We put one of our coat over him to keep him warm. He said his leg hurt and he thought he had broken it.

“He then kept closing his eyes as if he was going to sleep, so I talked to him about who he was and where he’d been going to keep him alert. I thought it best to keep him conscious.”

Dan said: “The paramedics spent a lot of time working on him, putting him in a neck brace and fitting leg braces. Then they put him in the ambulance and took him off to hospital.

“I was shaken up by the incident. But it was good to be able to help the man. It was only what I would hope anyone would do.”

Steve Dipple, Regional Manager of the Lanes Birmingham depot, who attended the scene, said: “We were very impressed by Dan and Carl’s quick thinking. It was an act of kindness to help, but also a reflection of their professionalism while responding to an emergency situation.”