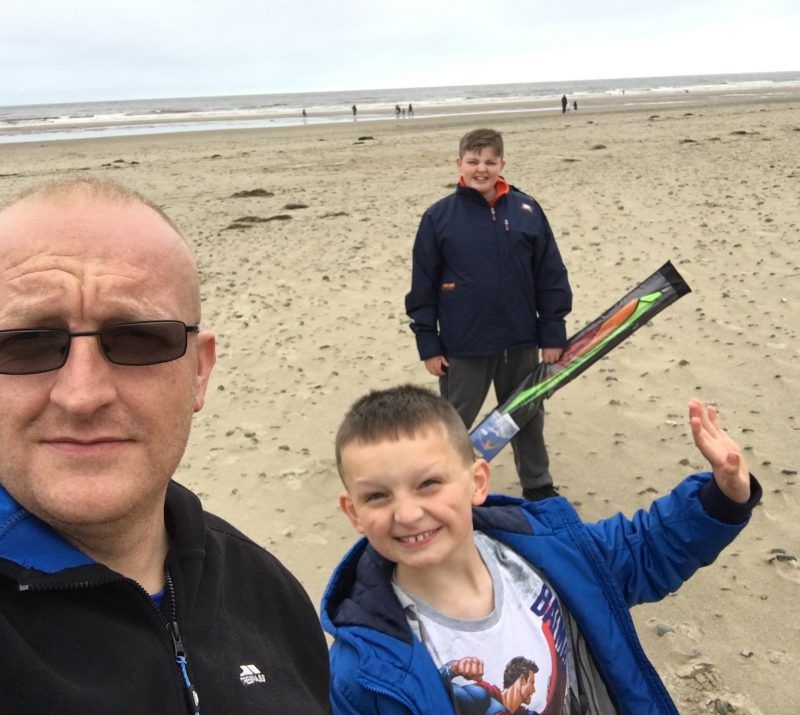 Lanes Group manager Chris Wilde has rescued two teenage girls who got into difficulty while swimming in big waves on the Welsh coast.

He swam out to them and helped them to shore – at one moment fearing he and the girls would be drowned – at Tywyn beach in Mid-Wales.

The incident is one of the latest example of seaside dangers, which has seen 12 deaths on British beaches in one week. On Wednesday 24 August, the bodies of five men were recovered from the sea at Camber Sands in East Sussex.

Lanes Group CCTV Systems Manager Chris, who is on holiday with his family in a caravan near Barmouth, said: “It was a frightening experience.

“I’m a strong swimmer, but I really did think, for a time, that we wouldn’t make it. I was thinking my two sons are watching, and I’m a goner.

“It shows how things can change for the worse in a split second. You really have to respect the power of the sea. You can’t take chances.”

Chris and his partner, Roxanne, had taken his sons, Travis, eight, and Ethan, 13, for a day on Tywyn beach on Tuesday 23 August.

They were in the sea when he heard cries for help.

Chris said: “It was windy, the waves were big and we could feel the undertow, so I was very careful to make sure we stayed close to the shore.

“Two girls were next to us, then I heard a cry from further out and saw another girl who was clearly in difficulty.

“One of the girls next to us started swimming out to her, and I realised I needed to help as well, because they were only about 14 years old.

“The girl who’d got into trouble had a boogie board, and I got us all on to it. But the waves were very strong, and coming thick and fast.

“I told the girls to kick to shore, but we were being swept further out. Every time a wave hit us we went under and had to get back on the board.

“I could see a woman who was clearly a mother of one of the girls, and shouted to her to get help, but everyone else was just watching.

“She ran off to a lifeguard station 50 metres along the beach, but at that point I suddenly thought, we’re in real trouble here.

“We went under five or six times. One of the girls was constantly screaming and I was trying to keep hold of both of them.

“Then, two big waves came along and pushed us back towards the shore. I managed to find my feet for the first time.

“By the time the lifeguard arrived, we had got back into the shallows. One girl was still screaming, the other was eerily quiet.

“I had swallowed a lot of water and suddenly I felt completely exhausted. The mother gave me a big hug as I tried to catch my breath.”

Chris said the lifeguard had been making calls to get an ambulance for one of the girls who appeared very shaken, but he wasn’t sure if it was needed, in the end.

He added: “The whole incident could have only lasted a two or three minutes, but it felt a lot longer. If we didn’t have that boogie board, the outcome might have been different for all of us.

“The sea at that point was like a whirlpool. Waves were being swirled around by nearby rocks. I’d do the same again, but I definitely feel lucky to be alive.”