Scott completes first stage of Tour of Britain – as a volunteer 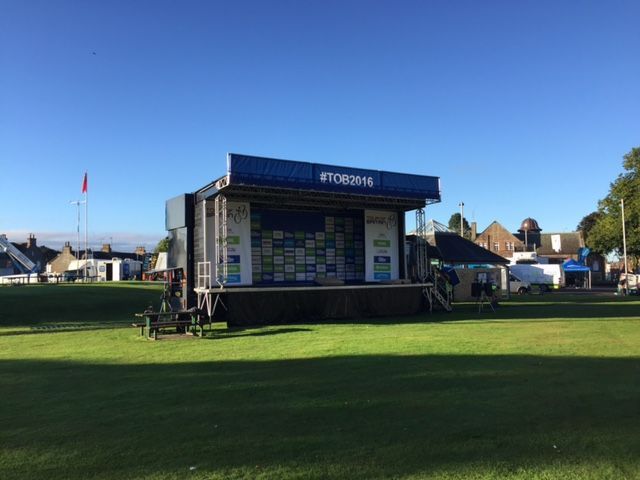 Quizzing Olympic silver medallist Mark Cavendish about a gashed leg and stopping excited cycle fans climbing onto the podium before the winner could was all in a day’s work for Lanes Group plc Commercial Director Scott Norris.

Scott is working as a volunteer race marshal for the UK’s biggest free-to-spectate sporting event. The 100.5-mile Stage 1 started in Glasgow and finished in Castle Douglas on Sunday 4 September.

Scott, who is based at Lanes Group’s Manchester HQ offices, was one of dozens of tour marshals in Carlisle to support the dramatic stage finish, which saw Mark Cavendish crash out on a tight corner close to the end.

Ironically, Team Sky’s Elia Veviani, who beat Cavendish to the gold medal in the Omnium event in Rio was involved in the same crash.

It was the first time that Scott, who was a volunteer marshal for last year’s Tour of Britain as well, had helped organise a stage finish.

He said: “My duties meant I didn’t get the chance to see any of the race itself. But I did have a few words with Mark Cavendish after the crash, mainly about the blood dripping from his leg.

“After the race, Wiggins went past me like a bullet whilst he was on his phone. It was difficult to take everything in when a hundred-plus riders with helmets and sunglasses all arrive at once, and are engulfed by many more team support people. It gets very messy at the finish!”

Scott’s 15-hour day as a Tour of Britain marshal started at 5.30am, when he set out from his home in Cumbria to reach Castle Douglas in time to start setting up the barriers, signage and promotional stands.

His duties then included directing police and tour motorcycles, helping control movement into and out of the team car park and guarding the podium where winners were acclaimed by the crowd from spectators trying to sneak cheeky selfies.

Scott said: “It was great just to be a small part in what was a huge event. Castle Douglas put on a great show for the Stage 1 finish. All credit to the town council for the way they supported the tour.

“The whole event went like clockwork. Everything was planned, and worked, to the minute. That’s why the race manual we use is more than 100 pages long.

“Seeing how the professional race teams operate up close is also impressive. They have some serious kit. Lorries arrive with pressure washers and clean down all the official and team cars, ready for a bright clean start the next day.”

Scott arrived home at 11pm, tired but elated. He is also marshalling during the second stage on Monday 5 September, which sees the riders race 116.6 miles from Carlisle to Kendal.
He is hoping for better luck for ‘Cav’ today.
The Tour of Britain has eight stages, ending in Regent Street in the centre of London on Sunday 11 September.