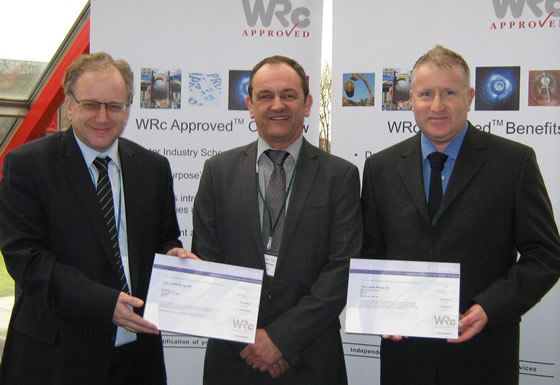 The Lanes Group is the first sewer rehabilitation specialist to be awarded WRc Approved™ certification for the installation of a WRc Approved™ patch drain repair system.

It is also only the second company to gain WRc Approved™ certification for the installation of a full-length liner, with its UV cure, CIPP, manhole-to-manhole system.

He explained: “WRc Approved is a voluntary ‘fitness for purpose’ certification scheme run by independent organisation WRc plc (Water Research Centre). It is becoming more and more widely recognised — and demanded by clients. London Underground was the first of our customers to ask for WRc accreditation.”

Clients appreciate the WRc scheme because they do not have to worry about a supplier’s claims regarding the product/service performance. WRc Approved™ means it has already been validated.

Darren said: “Quite simply, WRc does the leg work for them. Not only do the WRc experts check that all manufacturers’ instructions are followed to the letter, they test the efficacy of the products themselves and monitor the procedures and processes involved in using them.

“Once you have a WRc seal of approval, customers know that they are going to get quality products and a quality service. It’s a pre-work guarantee.”

Kevin Adams of WRc added: “The client gets assurance that not only has the product been independently audited for performance, but that the installer has demonstrated the ability to install to the specified method and standards required for the product.”

To gain WRc Approved™ certification, Lanes went under the microscope for two days of inspections. The WRc experts looked at the products, how they were stored and used; housekeeping and material audits; watched installations and examined Lanes’ own health and safety procedures. The inspectors also visited two live work sites: a patch lining in Manchester and a UV installation in the North East.

Just five days later, Darren got the good news. “Obviously we were delighted,” he said. “Lanes is all about quality, but having that independent WRc Approved™ status is a perfect reminder of it. WRc is a big plus to add to the reasons why people should choose Lanes!”

Next up may be more WRc Approved™ Lanes’ reline services. Watch this space!