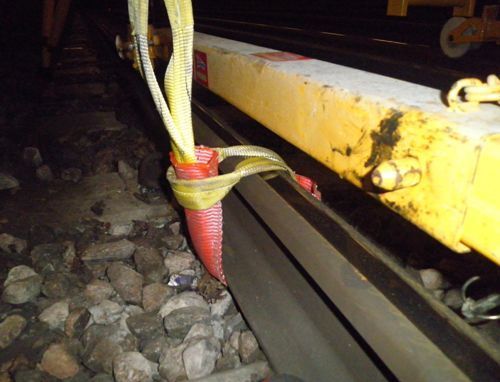 The Lanes Group has developed a simple yet highly innovative safety device that has the potential to transform working at height across the rail industry – significantly improving safety, productivity and staff satisfaction.

The new rail safety strop is attached to the rail, acting as a restraint point, to stop staff working at height from entering unsafe areas and preventing falls.

The simple device has been developed by the Lanes Group’s Rail Division at Rainham in Essex, working in close partnership with London Underground Ltd (LUL).

It has now been approved for use on LUL’s network. But Scott Tracey, the division’s Health and Safety Manager, who has led the development of the device, says it has applications across the rail industry.

He said: “The rail safety strop takes a quarter of the time to set up, compared with the system it replaces. It can be operated by one or two operators, rather than four, is one tenth of the cost and virtually eliminates trip hazards.

“Significantly, because it is so much easier to use, it has been readily welcomed by our teams, which gives us greater assurance that the new safety procedures are being fully complied with.”

To use the man-anchor system, each member of a four-operator team must move the equivalent in weight of 18 average-sized men on each platform – compared with one operator moving the equivalent of 1.2 men with the rail safety strop.

The idea is just one of the successes since Lanes for Drains won a TPS (Total Purchased Services) maintenance contract in 2010.

Matt Todd, Director of the Lanes Group Rail Division, said: “Under TPS, LUL requires contractors to be innovative in their service delivery. We looked at the systems for safe working at height on platform canopies and realised there was an opportunity for improvement.

“We took the idea of using the rail as a restraint point to LUL and then worked with our colleagues at LUL’s Asset Performance Directorate to develop a Safe System of Working. It’s an excellent example of teamwork to gain real improvement.”

LUL construction supervisors James Elligott and Michael Billingham have been working with the Lanes team on the project. James Elligott said: “As the system is so easy to set up, it gives us more confidence that operatives will follow the safe system of work, therefore reducing the risk of a fall.”

Mimi Worku, Stations and Depots Delivery Manager for LUL, said: “As part of our health and safety improvement plan, we have worked as a team with Lanes and their supply chains to continuously improve the safety culture on site.”

Scott Tracey said: “We have only just started to use the device but we would expect it to have a significant long-term impact on our health and safety, and productivity performance, in delivering our maintenance contracts.

“There is no reason why the system could not be used across the rail network and we will be seeking to incorporate it in the delivery of future maintenance contracts we hope to win on both Network Rail and the London Underground.”