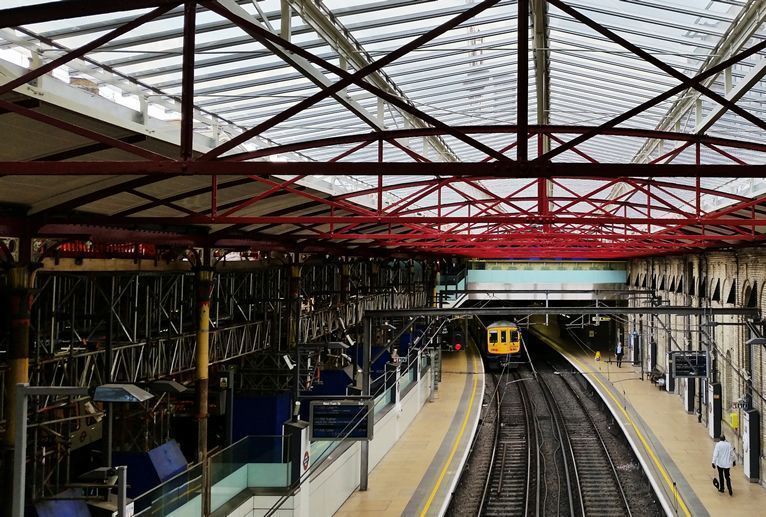 Lanes Group has used its pipe relining expertise to help preserve the original look of one of the world’s oldest underground railway stations.

Its engineers were called in by London Underground to reline the inside of Victorian cast iron roof columns which, for more than 150 years, had taken rain water from the roof of Farringdon Station to below ground drainage systems.

The Rail Division of Lanes Group, the UK’s leading drainage solutions provider, was commissioned to carry out the downpipe rehabilitation work as part of a major refurbishment of the Grade II-listed station – once known as Farringdon 30 buckets because the roof was so leaky.

David Finch, regional manager of the Lanes London depot, whose team carried out the reline work, said: “The liners had to be fitted with great care and precision. We had to get each liner right first time, and we did.”

Farringdon Station formed the eastern terminus of the world’s first underground railway, opened in 1863, which ran the four miles to Paddington Station, and now forms part of the Metropolitan Line.

The refurbishment programme, now nearing completion, prepares the station for the opening of £15 billion east-west Crossrail in 2018.

At that point, Farringdon Station will become the crossroads for rail lines leading to all four London airports, making it one of the busiest underground stations in the world.

As part of the refurbishment, the original station roof, still showing signs of pollution damage caused by smoke and steam from the original steam locomotives, was extensively refurbished.

London Underground engineers were keen to continue using the cast iron roof supports as rainwater downpipes, to avoid having to install a different system that might conflict with heritage preservation requirements.

Before undertaking the relining works, a CCTV drain camera team from the Lanes London depot was brought in to inspect the columns, to assess the viability of the solution.

Mark O’Leary said: “The video footage the Lanes engineers recorded showed that the columns had no inner liner, and had been corroded by the millions of gallons of rainwater that has flowed down them over 150 years.

“However, they were still structurally sound, and could still do their job as downpipes, if they were relined.”

Lanes helped structural engineers Roughton, who managed the refurbishment project, to identify the columns that would form part of the new roof drainage system.

A reline team from the Lanes London depot carried out the work, using a technique called CIPP, cure in place pipe lining.

Working from a scaffold crash deck installed by the roofing contractor high above the station, they installed a specially designed hopper over the top of each column being relined.

A 12m-long liner, impregnated with resin and 4mm thick to give extra strength, could then be attached to the hopper and inverted into the pillar.

The liner was inflated with water, pushing it against the column, and the resin was left to cure, or harden.

The reline project was a complete success. Each of the 12 pillars now has a tough, smooth, waterproof inner wall, designed to extend the life of the roof drainage system by 120 years.

Andrew McQueen, head of rail projects at Roughton, said: “This was a good example of partnership working between us, London Underground and Lanes Rail. It was a practical solution that preserved the station’s visual integrity.

“Because the capacity of the downpipes has not increased, we have designed the roof to act partially as a ‘blue roof’. That is, the above ground drainage elements can store water during periods of heavy rain and release it in a controlled way into the drainage system.”

The station was once known as ‘Farringdon 30 buckets’ because of the number of leaks in the roof when it rained. Now, thanks to a refurbished roof and drainage system – and 12 liners, installed by Lanes Group, rail passengers will stay dry for decades to come.