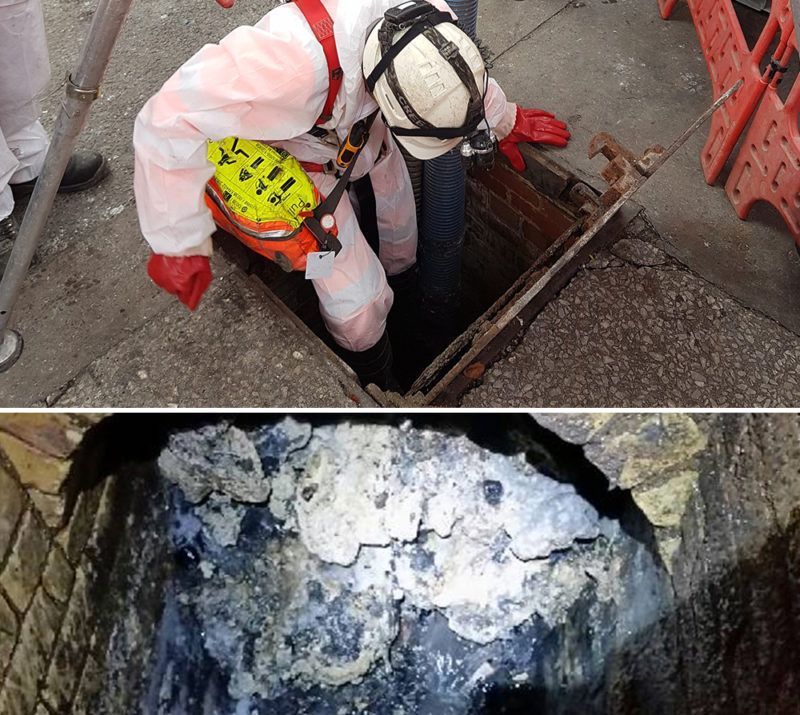 The photos above show the Lanes Utilities team working on the monster fatberg found in Whitechapel, London. Dubbed “Fatty McFatberg” by the public beating “Fat the Ripper” in a poll taken on twitter by the public.

A “monster” fatberg being removed by Lanes Utilities waste water engineers in partnership with Thames Water has become one of London’s newest tourist attractions.

Visitors to the city are stopping to take pictures of the Lanes personnel working in Whitechapel, east London, to remove the mass of congealed fat, oil and sanitary products along a 250-metre length of Victorian sewer.

Since the project began to clear the fatberg, estimated to weigh up to 130 tonnes – the same as 11 London double-decker buses – there has been huge interest from around the world.

Most recently, Thames Water has been praised for deciding to turn the fatberg into 10,000 litres of bio-diesel fuel, enough to power 350 double-decker buses for a day.

The fatberg clearance work, being spearheaded by Lanes Utilities, part of Lanes Group plc, which is Thames Water’s wastewater network partner, has been reported extensively around the world.

It has also become a social media sensation. Thousands of people have shared tweets about the fatberg, and hundreds have participated in a Twitter poll to name the fatberg, with ‘Fatty McFatberg’ just edging out ‘Fat the Ripper’.

The interest has been welcomed by Thames Water, as it highlights the problems caused by the wrongful disposal of fats, oils, sanitary products and wet wipes, which should either be caught in a fat-trap, or disposed of in a bin.

The publicity is a major boost for Thames Water’s ‘Bin it – Don’t block it’ campaign.

Take a look at this infographic of the whitechapel fatbert “Fatty McFatberg” broken down.

Lanes Utilities Director Andy Brierley said: “We’ve been amazed by the interest in our work. Fighting fatbergs is part of our day job, but this project has caught the public imagination.

“We’re delighted that it’s given Thames Water and ourselves the chance to highlight the major problems caused by people and commercial businesses flushing the wrong things down toilets, or pouring them down sinks and drains.”

Andy Brierley said the Lanes teams working on the ground are getting a clear sense of what a phenomenon the fatberg has become.

“We were working with some TV media in Whitechapel when some American tourists came up and said, ‘Is that the Whitechapel fatberg, wow!’, then started taking pictures of it themselves.

“They had been told about the story by relatives back home, so had been hoping to see it during their visit to Whitechapel. Our teams are getting a lot of positive comments from members of the public who say it’s made them realise they need to change their behaviour with regard proper use of toilets, drains and sewers.”

The fascination with fatbergs, first revealed when Thames Water publicised details of the much smaller Kingston-on-Thames fatberg, weighing in at just 20 tonnes, shows no sign of abating.

“There is something special about this being in Whitechapel, an area traditionally associated with mystery and danger – Jack the Ripper being a case in point – that, I think, has helped propel this story around the world.

“Like icebergs, fatbergs are a hidden threat, not in the water, but lurking directly beneath our feet. Also, people have always been fascinated by dirt, poo and bodily functions. It would take a psychologist to fully explain the interest!”

In an operation expected to take three weeks, teams of up to eight Lanes and Thames Water personnel are working to remove the fatberg in a Victorian brick-lined egg-shaped sewer along Whitechapel Road.

The work required the co-ordinated actions of the UK’s most skilled and experienced wastewater engineers, used to working in the most challenging sewer environments, and some advanced sewer cleaning technology.

On each shift, working within a restricted 8am-4pm time slot, there is a Lanes CCTV drainage survey team, a recycler jet vac tanker team, a confined space entry team, and vacuumation tanker driver.

The recycler jet vac tanker, which can filter and reuse its water, making it 68% more productive than a standard jet vac unit, is used to blast the fatberg, then pull the material back to a manhole.

Once the vacuumation tanker has sucked up the material, the water is pumped back to the recycler jet vac to be reused. The congealed fat and sanitary products – known as rag – are then taken away for safe waste disposal.

Confined space entry teams also have to enter the sewer to hack the fat from the sewer wall by hand, or break it up at the bottom of the manhole ready to be sucked up.

Health and safety is the paramount concern, said Lanes Field Manager Dave Mimms, who is overseeing the operation. He said: “Entering a large sewer is probably the most hazardous thing we have to do.

“Our teams carry gas monitors, and a confined space rescue team is always on hand. If gas levels rise, we wear full breathing apparatus to do the work. If conditions are particularly bad, we stop work completely.

“Some of the fat deposits are so hard they have to be removed with shovels. It’s important to get every bit of it off. But the sewer is only 1.2m high, and 700mm wide in the middle, and 300mm wide at its base.

“So, space is very restricted. We have to crouch all the time, and it’s like walking along a plank. It’s often also be very hot and humid, and of course, the smell is not pleasant, though our teams have mostly got used it.”

Lanes civils repairs teams are also hard at work repairing the sewer’s 19th Century brickwork. Some bricks are missing or cracked, damage caused by the weight of the fatberg pulling on the sewer walls.

Dave Mimms is also pleased the publicity over the Whitechapel fatberg has helped raise awareness about what should and should not find its way into Britain’s sewers.

“Strangely enough, most of us enjoy our job,” he said. “We wouldn’t do it if we didn’t. But it is dirty, and potentially dangerous work, and much of it could be avoided if people thought twice about what they send down sewers.”