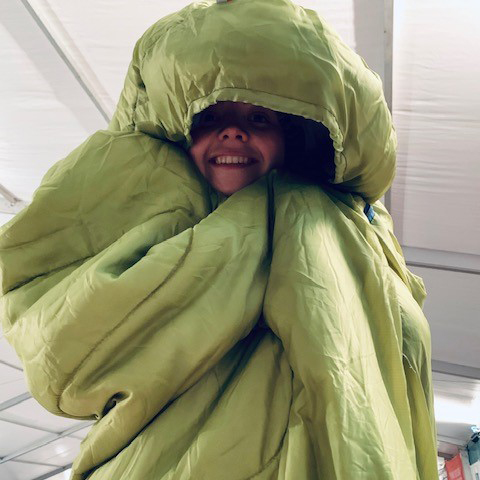 Six colleagues from Lanes Group plc have joined nearly 1,000 others in a giant sleep out to raise money for homeless young people.

They braved wintry weather, wind and heavy rain to spend the night sleeping on the hard ground at the Queen Elizabeth Olympic Park in East London.

The Sleep Out was one of two organised by Centrepoint, a charity that helps homeless young people. This year’s events were attended by more than 900 people, raising over £490,000.

Between them they have raised over £1,200 to help fund Centrepoint’s vital work.

Molly Hooper said: “The Sleep Out took place in marquees set up in the park. We were given large plastic bags to lie in and these were laid on plastic sheets on the hard ground.

“It was cold and there was rainwater dripping through the marquee so there was water everywhere, but it wasn’t half as bad as it must be to sleep rough for real.

“It was a pretty unpleasant experience, but we were pleased to be supporting Centrepoint and it helped open our minds to what homeless people go through, so it was really worth doing.”

After getting only a few hours’ sleep in their giant tent, all six then packed up their sleeping bags and went straight to work. “That was a particularly tiring day,” said Molly, Streetworks Coordinator for Lanes Utilities.

Lanes Group Director Andy Brierley said: “These friends and colleagues showed the kind of community spirit we admire at Lanes. At this time of year, homeless people need all the help they can get, so this was a brilliant cause.”

Centrepoint supports more than 15,000 young homeless people every year, with housing, practical advice and social support. It also carries out research and works with agencies across the UK to tackle issues that cause young people to become homeless.