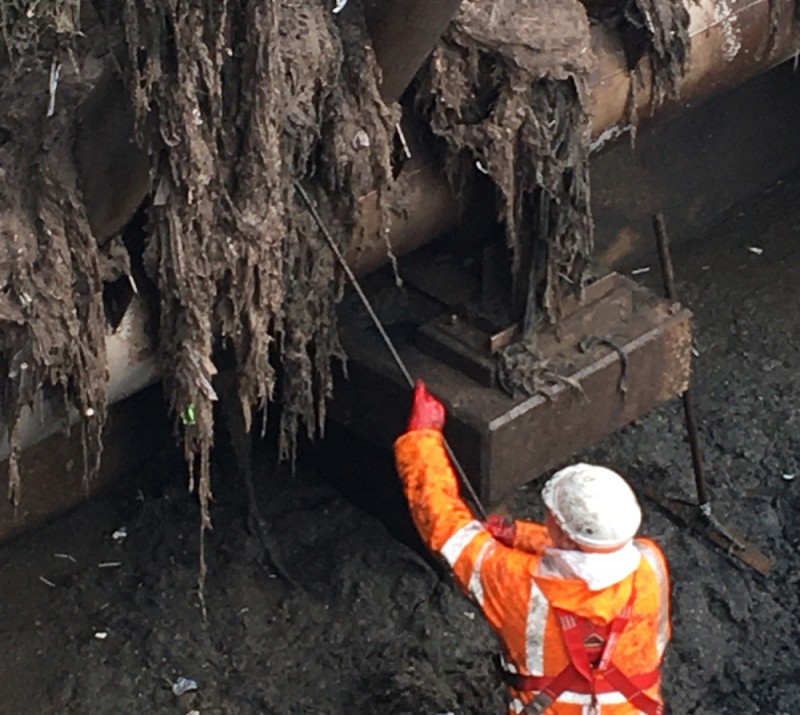 A team of wastewater engineers from Lanes Group plc has completed the cleaning of a giant sewage holding tank that had become clogged with millions of wipes wrongly flushed done toilets.

Working for Northumbrian Water, the ten operatives took ten days to clean out the aeration tank at Marske water treatment works near Redcar on Teesside.

The water company invited journalists to watch the tank cleaning work as part of its support for Unblocktober, a month-long campaign created by Lanes, the UK’s largest independent drainage and utility specialist.

The campaign has reached hundreds of thousands of people with its call to put wipes and fats, oils and grease (FOG) in the bin, not down toilets and sinks. Wipes contain plastic, which can end up polluting waterways and oceans, damaging wildlife.

“Wet wipes are one of the biggest causes of blockages for us and we really need our customers’ help to wipe out the flushing of wipes. Despite wet wipes being promoted as ‘flushable’, they rarely are.

“They may leave your toilet bowl when flushed but can clog up householders’ plumbing and can also cause blockages in our network of sewer pipes. Blockages can have devastating consequence, flooding homes and polluting the environment, which is so saddening to see.”

Anthony Gray, Area Development Manager for the Lanes Tankering Division, which carried out the tank cleaning work for Northumbrian Water, said the sewer system was being damaged by “invisible fly-tipping”.

He explained: “We all hate to see rubbish being dumped on the roadside. Unfortunately, thousands of people are doing the same thing to our drainage system every day by flushing wipes and other items down toilets.

“Of the solid material removed from the tank, once the water had been drained off, 50 tonnes of it was wipes and other consumer items, like period products, and 40 tonnes was silt and other debris, including plant matter.

“There are four aeration tanks at the Marske treatment works. We have to clean out each one every two years. If the wipes were not being flushed down toilets, they would only have to be cleaned every seven years.”

The aeration tank holds six million litres of water, over twice the volume of an Olympic swimming pool. It plays a critical role in the treatment process by oxygenating the water, encouraging bacteria to break down sewage.

The tank was first emptied over three days. Water was pumped into the other three tanks. Then, three tankers were used to carry 450,000 litres of sludge, in 90 lorry-loads, to an authorised waste disposal site.

Then, members of a Lanes confined space entry team were lowered into the tank by crane basket to remove solid waste clogging the tank’s decanting arm and use water jets to clean down the inside the tank.

The waste was lifted from the tank in one-tonne bags, then placed in skips and taken for authorised disposal.

Lanes used advanced high volume vacuumation technology to carry out the tank cleaning quickly, safely and effectively. It deployed one of its SuperFlex 414 jet vac tankers, which has enhanced vacuumation capability, so could suck sludge from the bottom of the 10m-deep tanks.

Unblocktober, the first campaign of its kind in the world, has been a resounding success. More than 4,000 individuals and employees across the UK signed up to the Unblocktober pledge of keeping FOG and plastic products out of their drains for a whole month.

The Lanes marketing team is already busy making plans with supporters, including Northumbrian Water, for Unblocktober to return next year even bigger and better.

As part of the Environment Agency’s and Water UK’s Love Water initiative, we’re hoping its growing profile will help to drive changes in people’s habits for years to come – reducing the burden placed on facilities like Marske treatment works through the misuse of wipes.