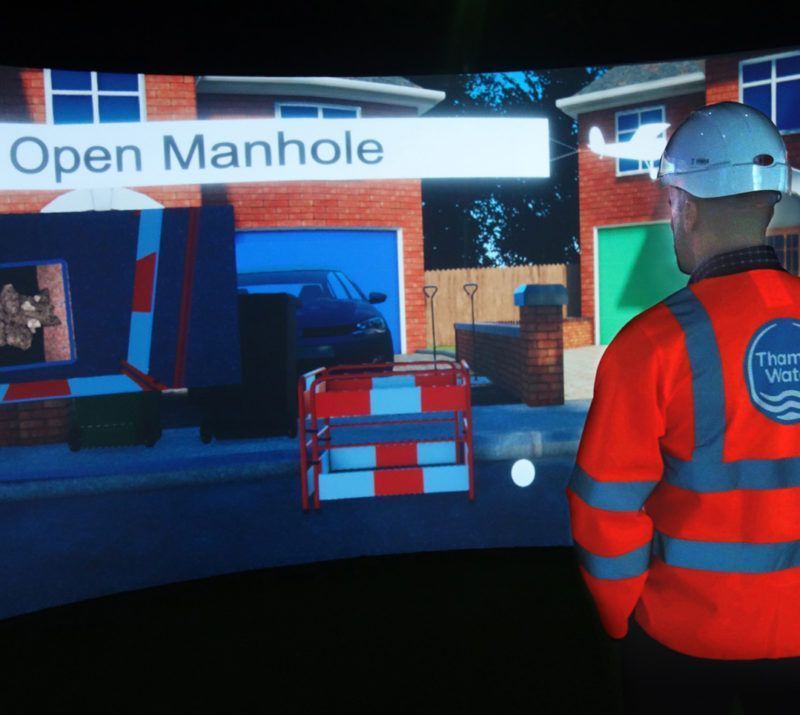 The company’s staff can now use virtual reality (VR) to train together in an immersive digital world where they can test their skills in a safe yet challenging environment.

It is believed to the first time in the world where VR has been combined with a 360-degree video theatre to allow groups of people to train together in an interactive space without having to wear headsets.

Lanes Group Director Andy Brierley said: “This is a gamechanger in the way we can train our colleagues, including wastewater engineers who often have to work in potentially-hazardous environments.

“Combining VR with 360-degree video allows us to use cutting-edge gamification techniques to train groups of people, which is both powerful and essential because of the way we work in teams.

“We are already calling the VR modules we’re creating training games, reflecting their interactivity and the way they draw on digital gaming techniques to increase engagement and enhance learning.”

In 2017, it invested jointly with Thames Water in the Igloo video theatre, to introduce a new, more immersive, approach to training. It was the first time an Igloo had been used for training.

After weeks of trial and error, Myriad’s success means groups of up to 15 Lanes and Thames Water employees can enter the Igloo and use VR wands to interact together with images projected on the screen.

A virtual digital environment, called Thames Town, which has urban, rural, industrial and residential settings, allows the teams to learn and test their skills to the limit in complete safety.

In the first training game, trainees are shown text conversations with a customer to establish the reasons for a visit to a house, then given multiple tasks, such as checking for faults with their equipment, taking photos of the worksite, and selecting the correct equipment to clear a drain blockage.

From March 2019, the VR Igloo has been used in induction training for the first time, and has been positively received by new recruits, says James Brewer, Lanes Learning and Development Specialist.

He adds: “VR adds a wow factor that has impressed the first cohorts of joiners who have experience it. In a competitive jobs market place, the need to engage recruits from day one to increase staff retention cannot be underestimated.

“VR training is more realistic, it allows our people to develop a richer mix of customer-focussed skills, both as individuals and teams, and it allows us to fully-integrate training of operational and office support teams.

“Over time, the VR Igloo will reduce costs as well, as we can do more training in-house rather than take people on location. The Lanes VR Igloo heralds nothing short of a revolution in the way we train our people.”