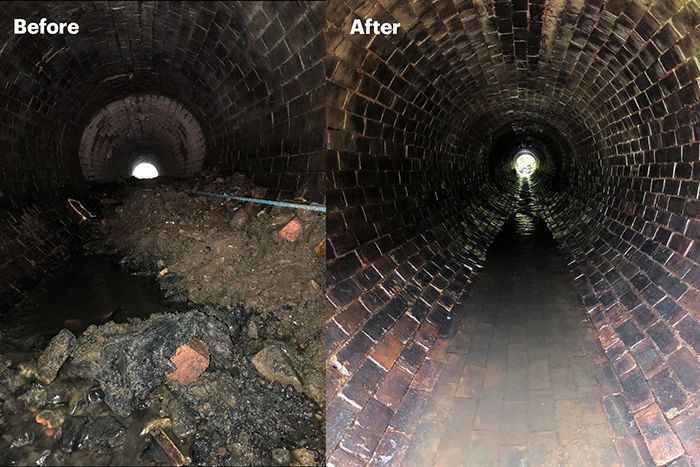 Drainage engineers from Lanes Group plc have demonstrated the power of water jetting when deployed to clear silt, rubble, and boulders from large-diameter railway culverts.

A team of drainage operatives from the company’s Manchester depot removed 25 tonnes of material from a 30-metre-long culvert under the Manchester to Wigan railway line at Atherton in just 20 hours.

Most of the material was removed from the 1400mm tall and 1200mm wide brick-lined egg-shaped culvert with water jetting delivered by a JHL 414 RECycler jet vac tanker.

The water jet, operated at 1,750 pounds per square inch (PSI), even brought larger stones, up to 300mm in diameter, towards the mouth of the culvert, where they could then removed by hand.

The culvert was in a field, 150 metres from a roadway. However, the recycler jet vac tanker could filter and reuse its water and do the same with water already in the culvert, which maximised productivity.

Network Rail commissioned Lanes, the UK’s largest independent drainage specialist, to clear the culvert to allow a secondary concrete pipe to be installed inside it to upgrade the rail line’s drainage system.

Jet Vac Drainage Engineer Damus Balfour said: “By continuously moving a jetting hose backwards and forwards within the pipe, we could draw back a large amount of material section by section.

“Network Rail operatives then used an excavator to collect the debris at the mouth of the culvert and dispose of it. Having a recycler jet vac tanker allowed us to set up a continuous and fast culvert cleaning operation.”

With their support, the two jet vac engineers, wearing emergency breathing kits, could support the jetting process by working in culvert in accordance with strict confined space entry procedures to remove larger debris by hand and with a wheelbarrow.

Network Rail had laid a temporary roadway across the field to allow the recycler jet vac tanker to get close enough to the worksite.

Ian Clapham, Lanes Area Development Manager for Manchester, said: “This project demonstrates the power of water jetting to clear large culverts. This pipe was 50% filled with debris but our advanced jet vac tanker could still clear it in two and a half days.

“If we did not have this highly-capable drainage equipment, and instead had to clear the culvert by hand, it would have taken a week, probably longer, while exposing the operatives to greater risks.”