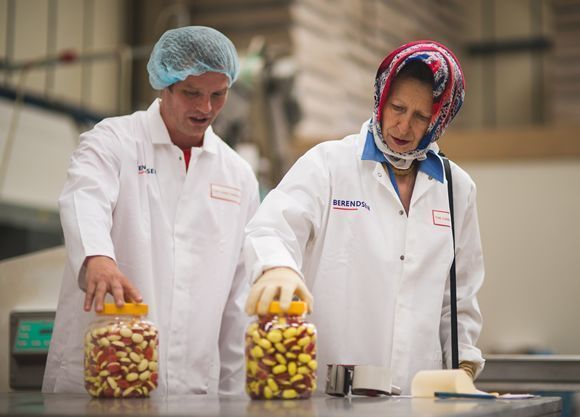 Lanes Group engineers responded to an emergency alert from a sweet manufacturer after a blocked drain caused a stink just hours before a royal visit.

Directors and staff at The Candy Makers were preparing in minute detail for a tour of their factory by the Princess Royal, when their plans looked like they were going down the drain.

Or, more precisely, they were not – because it became clear that a drain had become blocked just outside their premises on the Parkside Industrial Estate in Leeds, West Yorkshire.

“Then one of our toilets backed up. This was just two days before Princess Anne was due to visit. Being a food manufacturer, we are hot on these kinds of environmental problems.

“But to be faced with a drainage problem, and an increasingly smelly one, just before Princess Anne was due to visit us, amounted to a bit of a crisis.

“We wanted to use drainage specialists who we knew had the capacity to do a thorough and quick job, so we called the Lanes Group and they were on the scene the same day.”

Geoff Davis, Area Development Manager at Lanes Group’s West Yorkshire regional depot in Leeds, said: “It was clear the drain was causing a stink, in more ways than one.

“However, we quickly identified site of the blockage and cleared it. That resolved the problem with the toilet and the bad smell quickly cleared.

“I could say we came out of it smelling sweetly, but what’s most pleasing is that our client could carry on planning for the visit with full confidence.”

Robert Whittleston said: “It was vital that the blockage was cleared, not least because Princess Anne got out of her car right next to the manhole where it was found.

“We are very grateful to Lanes. They responded swiftly and did a very good job.

“The visit went extremely well. Princess Anne said she very much enjoyed seeing what we do. She was with us on the same day she was celebrating the birth of her great-nephew, so it was a very happy occasion.”