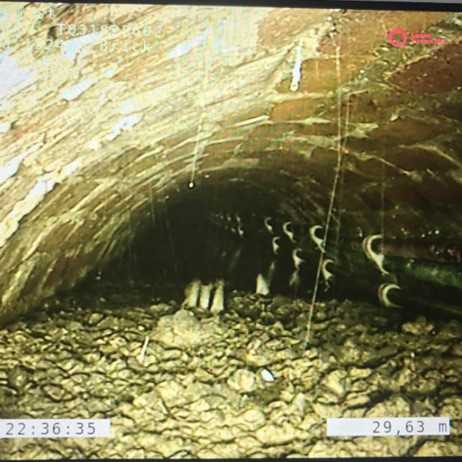 Wastewater engineers from Lanes Group plc are supporting Thames Water in the removal of a ‘concreteberg’ as heavy as a blue whale plugging three London sewers.

The giant mass of solidified cement and ballast, thought to be at least 100 metres long and weighing 105 tonnes, has been discovered at the junction of Gosling Street and Hall Street, in Islington.

A team of Lanes wastewater operatives are preparing to work with Thames Water colleagues to remove the giant blockage.

They will use a range of cutting tools to remove the rock-hard concrete, including high-pressure water jets from a specialist concrete-busting jet vac tanker and pneumatic drills.

Tankers will be on standby 24 hours a day, ready to pump out local sewers to protect local properties against the risk of sewer flooding caused by the blockage.

Thames Water says the concreteberg is the biggest they have every seen, will cost hundreds of thousands of pounds to remove, and is likely to cause traffic disruption during the two months the operation is expected to last.

Lanes Director Andy Brierley said: “Many people are now aware of fatbergs – giant sewer blockages caused by fats, oils, grease, wipes, and other products that are wrongly disposed of down drains.

“Problems caused by concrete being poured down sewers, either deliberately or accidently, are less well known, but they cause a major nuisance, not least for local communities where it happens.

“Removing this concreteberg also represents an unnecessary hazard for our wastewater engineers, who are having to go down into Victorian sewers and chip the concrete off their brick walls inch by inch.”

“We’re now doing everything we can to deal with it as quickly as possible, making sure our customers don’t have to suffer because of this mindless abuse of our network.”

Thames Water has begun an investigation into how the concrete got into the sewer and will seek to recover costs if those responsible are found.