A commonly used generic term for a Rotating Biological Contractor, which is a packaged type of sewage treatment system.

A check or non-return valve allows fluid to flow through it in one direction only. Multiple check valves can be connected in series to prevent backflow of, say, contaminated water from going back into a clean water supply.

The key to its operation is pressure. For example:

Combined sewer systems are designed to collect both stormwater and foul wastewater in the same pipe. These combined systems are no longer used because current design separates foul waste from surface water, but older developments may have combined sewers. All the wastewater is transported to a sewage treatment plant, where it is treated before being discharged to a watercourse.

Where there are combined sewers, combined sewer overflows (CSO) are an important part of the sewerage network and are instrumental in preventing flooding in our streets and premises.

If an area is hit by heavy rain, as we have seen more frequently in recent years, combined sewers become inundated by rainwater and so the contents (including sewage) starts backing up to cause flooding.

Where there is a CSO, this excess rainwater and sewage is forced into a separate pipe or overflow which runs off the main sewer into a river or the sea. Water and sewerage companies (WaSC) are allowed to use these with the permission of the Environment Agency on occasions when the sewer system is overloaded and the excess would otherwise contaminate property.

Refers to various methods used to cure a resin-impregnated liner so that it hardens inside a damaged pipe, creating a new pipe inside the old one. Curing may occur by using hot water, by ambient temperature or through the application of UV-light.

Drain cleaners may refer to chemical-based products or to the physical devices used to unblock sewer pipes.

For instance, chemicals or basic plungers are generally used for a troublesome single sink, toilet, bath or shower drain, to try to remove ‘soft’ obstructions such as hair and grease build up in interior drain openings.

For more serious blockages, specialist help may be required to tackle obstructions affecting the length of a drain, from the opening right through the main sewer to any lateral connections. In this case, the blockage would be tackled with high pressure water jetting.

There are some disadvantages to using chemicals, especially acidic drain openers which may react violently with water or give off explosive hydrogen vapours on contact with metals. This can cause chronic (delayed) and acute (immediate) health hazards if inhaled, ingested, or touched. Always follow manufacturer’s instructions for use. 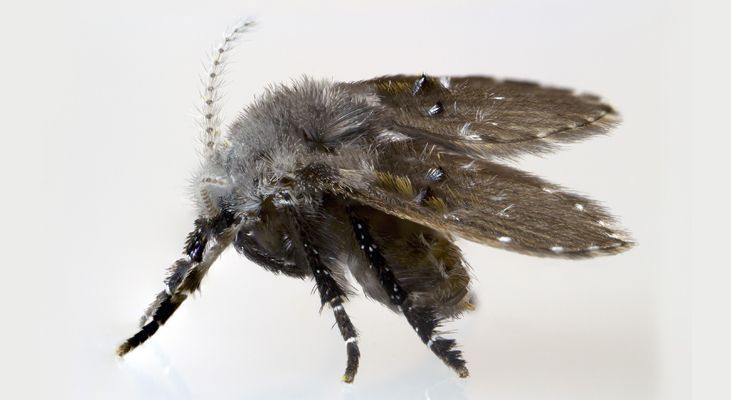 Drain flies sometimes inhabit plumbing drains and sewage systems. Although more common in the tropics, they do tend to breed in moist areas where there is decaying organic matter, such as in sink, shower and floor drains, or where there are leaks. In commercial buildings, sump pump pits, sewers, and elevator pits may trap moisture where drain flies can breed. They are generally harmless but can be annoying.

Thorough mechanical cleaning of drains will remove the larval food source, and is the most effective control measure though injected foams containing bacteria or enzymes may be useful to break down gelatinous scum deposits.

A trench filled with gravel or rock or containing a perforated pipe, which takes surface water away to stop it causing damage to building foundations. Sometimes used to carry water in a septic drain field, or to relieve ground water pressure.

Used to position a patch repair liner by pushing it out against the internal surface of the damaged pipe. The patch then cures to create the repair.

The method by which the impregnated liner is installed. The tube liner is forced through the damaged pipe using water pressure. At the same time, the water also turns the liner inside out, pushing the resin impregnated side outwards to adhere to the inside of the pipe, sewer or drain. 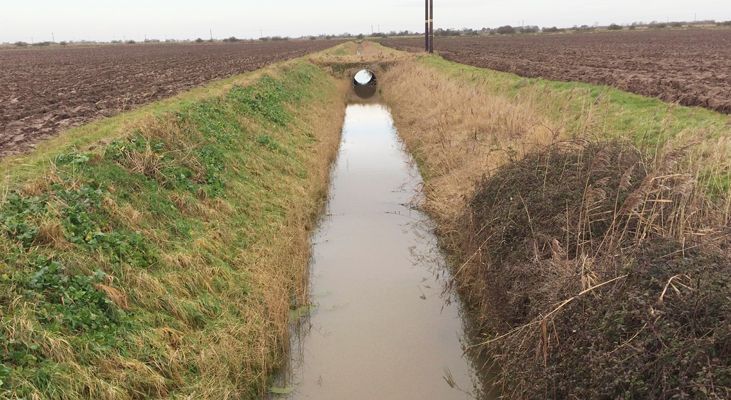 Land drains are used in agriculture and building construction to drain wet or swampy ground. They are typically perforated or open joint pipes, laid in a linear form, as steeply as possible to give the quickest and most effective drainage. They usually carry excess water to an open ditch or natural water source.

Traditionally, agricultural land drains were formed in clay soils and peats by excavating a trench and creating a tunnel with flat stones. This was labour-intensive but used free and readily-available materials. Today, rigid or flexible plastic pipes pierced with holes and laid in pea gravel are installed by specialised mole ploughs which form the hole, insert the pipe and gravel, in one simultaneous and continuous process.

Construction land drains are slightly different, because voids in the ground would fill with water. Land drains are introduced to relieve pressure on subterranean structures and retaining walls caused by the presence of water in the surrounding ground. So drains are created by back-filling with rubble behind retaining walls and allowing water to drain through the rubble. On road projects, land drains may be installed instead of open ditches at the side of highways.

A liner is a tube of special felt or a fibre-glass matrix material, manufactured to a specific length and diameter for the renovation, which is then installed in a sewer or pipe to create a new pipe inside a damaged one.

A macerator toilet can be installed even though there is no access to a foulwater discharge pipe.

Solid waste and toilet paper is macerated into a liquid that will go through pipes as small as 25mm diameter.

When a macerator toilet is flushed, the waste is sent into the pulverising unit, instead of directly to an outflow pipe. A blade spinning at up to 3,600 rpm churns the waste into liquid in a matter of just seconds. A pump expels the liquid waste and, once the process is complete, the toilet refills as normal.

Similar to a liner, but used to repair isolated defects or small damaged sections of a drain, sewer or pipe.

This is the tank where the majority of solids settle and are removed from the crude sewage that flows into the primary settlement tank. 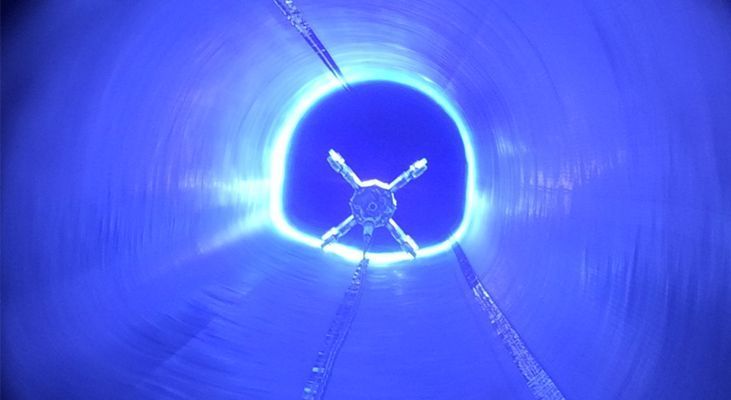 The method of repairing a drain or sewer by creating a new pipe within the existing one, without the need to excavate. Also known as CIPP (cured in place pipe).

The liner is impregnated with resin prior to being installed into a pipe. The resin is cured, hardening the liner to create this new inner pipe.

Used to stop water ingress in manholes. Polyurethane resin is injected into the manhole where it expands to 40 times its original volume on contact with water, sealing holes and cracks.

Sanitary sewers transport sewage waste/wastewater/effluent from a property to the wastewater treatment plant. They may also carry industrial wastewater. Sanitary sewers are designed for sewage alone, unlike combined sewers which also take surface water run off.

Lateral pipes run from buildings to branch sewers, which in turn connect to the main public sewer. Manholes – concrete chambers – connect the mains to the surface, and give access to the pipes for inspection and maintenance, and to vent sewer gases.

As sanitary sewers carry only foul sewage, there is no need for combined sewer overflows (CSOs) to deal with surface water inundation. Whilst permitted in certain circumstances, CSOs cause pollution by discharging human and industrial waste into the sea or watercourse, with resultant contamination of the environment, drinking water and river/sealife.

This is the tank where humus (organic matter) is separated from the effluent/liquid that flows through it, via biological filters or other biological treatment units.

A drainage system that deals with foul water via one system of pipes, and with surface water via another (separate) system.

Storm- or surface-water drains and sewers carry excess rain/groundwater from impermeable surfaces such as paved streets, car parks, drives, footpaths and roofs. Roof gutters on buildings, and drains and gulleys on roads connect to the surface water system for this purpose. Some storm drains connect to the foul water system and are what is known as a ‘combined sewer’, others are gravity sewers which direct untreated storm water into rivers or streams: the reason that foulwater drains must never be miss-connected to storm drains.

During extreme weather, storm drains can become inundated, causing street level and underground premises (cellars, etc) flooding to occur. In flood risk areas, attenuation tanks may be installed to hold rainwater run-off temporarily, limiting the outlet flow to the public sewer and lessening the risk of the public sewer being overburdened.

The increase in concrete, paving and other impermeable surfaces means less rainwater drains into the land. Instead, it is channelled into the surface water drains. This can cause flooding in very wet weather when there is too much rain for the system. SUDS or ‘sustainable urban drainage systems’ use a natural approach, holding and releasing surface water in a controlled way so that the system is better able to cope, and allowing nature to break down pollutants.

Examples of SUDS are:

An aco or trench drain is a trough or a channel in the ground that takes surface water away from an area quickly. It may also be used for containing utility lines or chemical spills.

Aco or trench drains may be part of a Sustainable Urban Drainage System (SuDS).

The trench will have a solid or grated cover flush with the floor. Different materials and capacities are available to suit any application, loading requirements and environment, from airports or heavy industrial sites to business premises, highways and conservation areas.

Used to indicate the level of water below ground. During flooding, the water table level is described as ‘saturated’.