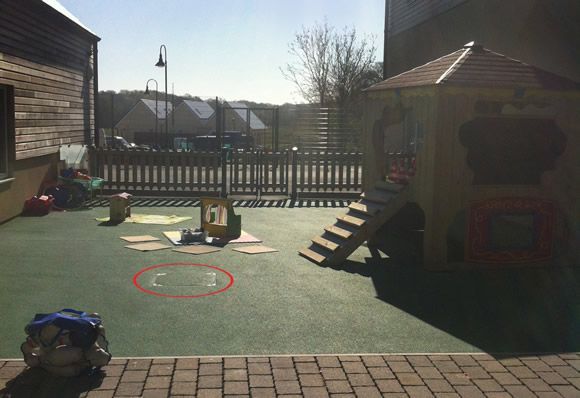 Lanes Group engineers have used their no dig technology to save a local authority money and allow primary school children to carry on playing.

They were able to mend an underground pipe without having to dig up an artificial grass play area, winning generous praise for the efficiency and quality of their work in the process.

Teachers realised there was a problem when the sink in the staff room at East Wichel Community Primary School in Swindon become blocked.

Swindon Council’s facilities management team found that a lightening rod installed in the school, which opened in July 2011, had been driven right through the pipe, which takes water from the sink to the nearby sewer.

Simon Bruton, Area Development Manager for the Lanes Group depot at Avonmouth, Bristol, said: “Gradually, over time, debris had become snagged on the lightening rod and caused a blockage.

“The 100mm pipe ran under an artificial grass play area next to the staff room. We accessed it through a manhole designed into the play surface and used a push-rod camera to survey the pipe.

“The council’s team had removed the rod, but we found that the pipe was badly cracked.

“Because Lanes is a UK leader in no dig drain technology, we were able to recommend a patch lining repair that could be carried out via the manhole, so there was no need to excavate the site.”

The repair was carried out by experienced Lanes engineers Nathan Gane and Mario Pastusiak.

They used a technique called CIPP, or Cure in Place Pipe repair. A 500mm-long glass fibre sleeve, impregnated with resin, was placed inside the cracked section of pipe. It was then pushed against the pipe by inflating a rubber tube.

Once the resin had dried, the tube was deflated and removed. When fully dried, or ‘cured’, the lining was hard and smooth, and the repair complete.

“We knew there might be a no dig option, installing a patch liner, and our highways management colleagues recommended that we approach Lanes for Drains.

“Their team was highly efficient, well-prepared and polite, which is important when working in a school where getting things right first time and sensitivity to the surroundings is vital.

“The work was completed speedily to a very high standard in little more than half a day. Given the alternative options, it was very cost-effective. I was impressed.”

Simon Bruton added: “As the UK’s largest independent drainage specialist, we are highly experienced in this sort of trenchless ‘no dig’ technique. It’s not quite child’s play, but we definitely have more options to get jobs like this done.”