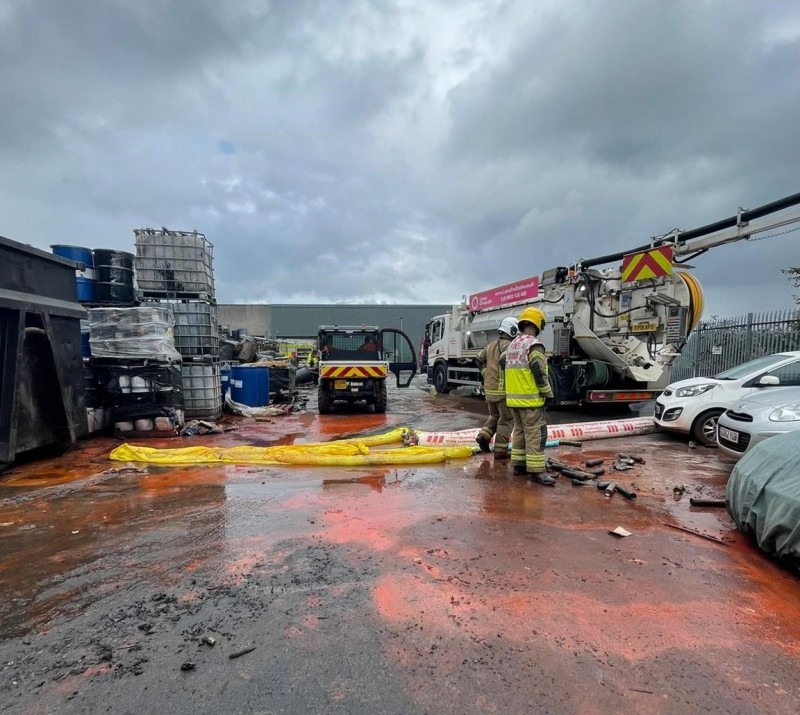 Drainage and wastewater specialist Lanes Group has been supporting firefighters and  the Environment Agency as they dealt with the aftermath of a huge industrial blaze.

The company deployed jet vac tankers to help prevent contaminated water entering surface water drains and water courses, including a canal that close to the site.

The fire broke out on the afternoon of Wednesday September 8th 2021 at a processing plant in Kidderminster, Worcestershire, causing large explosions and sending a huge column of smoke over the town.

Hereford and Worcester Fire Service led the effort to tackle the blaze, with 100 firefighters involved. Homes and businesses close to the fire were evacuated and 14 schools were temporarily closed.

Once firefighters had finished damping down the fire, Lanes tankers remained on site to remove contaminated water from the canal, where it had been contained within retention booms.

He said: “We are very pleased to be able to support all the agencies involved in containing the potentially extremely damaging impact of this fire to the local environment.

“It was literally a case, for all involved, of working night a day to manage a complicated and potentially hazardous operation that has contained potentially toxic waste, protecting local people and wildlife.”

Environmental specialist Adler and Allan, commissioned to oversee the pollution control effort, called Lanes for support early on the morning of Thursday September 9th, with the first jet vac tanker arriving by 9am.

In the early hours of the emergency Lanes wastewater operatives working for Network Plus, on behalf of Severn Trent, also attended the site to help prevent the fire water getting into surface water drains and sewers.

Even 24 hours after the blaze started, firefighters were putting up to 2,500 litres of water per minute onto the devastated site, where highly-flammable chemicals and gas canisters had been stored and used.

Lanes jet vac tankers intercepted approximately 300,000 litres of run-off water in the first 24 hours, preventing it from reaching the canal.

The water, much of it tainted red by the chemicals involved in the blaze, was over-pumped to 70,000-litre mobile tanks, brought to the site to hold the polluted water before it could be moved off site.

As fire fighting operations came to an end, on Saturday Lanes worked with the fire service right at the centre of the devastated site to contain and remove any remaining fire water.

On Sunday, Lanes tanker crews, working with Adler and Allan colleagues, turned to supporting the Environment Agency in removing contaminated water from the canal, allowing the canal to reopen, marking the successful conclusion of the pollution containment phase.

Lanes tankers based in Stafford continued to support Adler and Allan  until Wednesday 15th September, a full week after the fire had started, to transport the remaining stored fire water to a specialist waste site for safe disposal.

Lanes Birmingham Regional Manager Mark Scott said: “A huge amount of credit for this Lanes operation goes to Nathan and Jake Cassidy, our site supervisor, as well as drainage engineer Paul Dunn, who was involved throughout.

“They put in sterling work, alongside Adler and Allan colleagues to respond rapidly to all requirements, drawing on their expertise to ensure the control efforts had always been at least one step ahead of pollution risks.

“Lanes has significant experience in supporting fire services, local authorities and the Environment Agency is carrying out this kind of pollution prevention work.

“As the UK’s largest drainage and wastewater service specialist, we can also mobilize quickly to call in all the jet vac tankers and vacuumation tanker assets needed to carry out this type of task smoothly and effectively.”